Being a Holiday Weekend, there’s no shortage of activity round these parts for the next few days. The ski slopes will probably be crowded to the gills with families on winter break, which is good reason for us locals to stay away from them and get into town, instead. By far the most interesting event among many in our local villages is the first Woodstock Memoir Festival, promoted by long-standing independent bookstore, the Golden Notebook in conjunction with the Kleinert/James Arts Center.

Though the web site claims, “We believe memoir to be at the frontier of literature today,” the festival itself is not limited to the notion of memoir as printed word: there’s a “Memoir as Art” exhibition, two sessions entitled “Writers, Musicians and Memoir,” and a “Memoir Brunch.” In addition, there are book signings, monologues and, the undisputed highlight of the festival, AN EVENING WITH THE McCOURT BROTHERS ~ Frank, Malachy & Alphie – at the Bearsville Theater on Sunday. Frank McCourt should need no introduction for his incredible memoir Angela’s Ashes; I have yet to read the books by his brothers. Nor do I know whether their “evening” will be pure monologue or an interactive conversation with the audience. But it sounds intriguing enough to attend.

“Many believe that the current popularity of memoir began with Frank McCourt’s Angela’s Ashes,” says the Woodstock Memoir Festival web site. Some of us might date it, instead, to Fever Pitch. Or any of the thousands of books that came beforehand. Memoir is a valid and valuable part of the literary canon.

Coincidentally, the Bearsville is playing host to another event just 24 hours earlier that could as easily have fitted into the Memoir Festival. “An Evening with Ronnie Spector – Beyond the Beehive” comes accompanied with a lengthy explanation that it’s “Not just a concert performance, this is Ronnie’s story, spoken and sung, along with visuals, about a girl who went from amateur night at the Apollo Theatre to getting into the Rock & Roll Hall of Fame.” Co-scripted by author Gerri Hirshey, “Beyond the Beehive was conceived about four years ago for a Woman’s Music conference at a University on the West Coast and this show at the Bearsville Theater will be the debut public performance.” Unfortunately – and I really mean this – I can’t attend, due to a prior commitment. I do plan to make the McCourt Brothers evening, however, and will report back after I do. 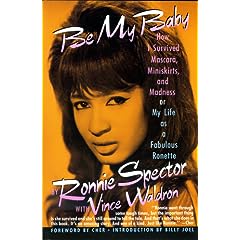 Ronnie Spector’s own memoir, Be My Baby: How I Survived Mascara, Miniskirts, and Madness, or My Life As a Fabulous Ronette, turns out to be seriously out-of-print. Fortunately I have a copy, not just signed but sealed with a lipstick kiss. And no, it is not for sale.