Hot Chip vs. The Streets: Girls vs. Boys?

Posted in Miscellaneous on August 4, 2010

Last night I finished one of the most amazing novels I’ve read in a long time: The Slap by Christos Tsiolkas. It’s set in Melbourne, Australia, a place I’ve never visited, and largely amongst the Greek community, one with which I have had only limited contact over the years, and yet it resonated as closely as anything I’ve ever read by Nick Hornby, Irvine Welsh or Jay McInerney. I’ll explain further, I hope, in a proper review; suffice to say that any book whose last chapter takes place at The Big Day Out, Australia’s annual massive rock festival, is bound to be of interest to me. 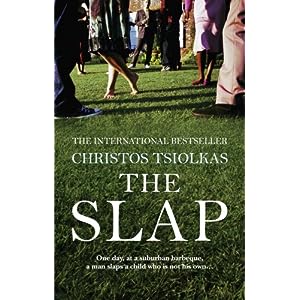 The book in question, apparently an international best seller. I wouldn’t have known about it if my best friend in Australia hadn’t b(r)ought me a copy when she came to visit.

Tsiolkas knows his music; he’d already proved as much with his description of a teenage party earlier in the book. He proved it again with this simple line –

the boys walking off to see The Streets, the girls going to Hot Chip

– which had me laughing out loud. After all, I don’t think my wife Posie has ever shared my passion for the Streets (in fairness, it’s hard to imagine an act connected with dance music any more English and masculine) and yet, true to Tsolkias’ simple observation, she is absolutely gaga about Hot Chip, especially the new album, One Life Stand, which is arguably their best (and certainly their most feminine) long player yet. In fact, in one of those delightfully serendipitous moments of timing, we’re heading down to New York City this afternoon on a very rare combined day trip to see Hot Chip perform in Central Park. Support comes from both Hercules and Love Affair, and Holy Ghost. It promises to be a wonderful evening.

Hot Chip know that they have a feminine side, that they could, at times, and especially without the electronic arrangements, even be construed at times as a “boy band.” The official video to “I Feel Better” plays on this appeal to absolutely hysterical effect. However, EMI have proved themselves yet again out of touch with the zeigeist by disabling embedding to drive everyone over to YouTube and bump up the viewing numbers accordingly. You’re welcome to do so. In the meantime, I am sharing the unofficial video which sends out a very different but, to my mind, more meaningful visual message.