WHAT: RoadKillOvercoat – Busdriver’s fifth album, his first for Anti-/Epitaph – is so much more than a hip-hop record: it’s a 21st Century psychedelic tour de force, with Regan’s torrent of playfully political stream-of-consciousness lyrics sung in pop melodies as readily as they are rapped, underneath which producers Nobody and Boom-bip quickly move away from standard beats to embrace trip-hop (‘Go Slow’), house music (‘Sun Shower’) and even a notable Yes sample (‘The Troglodyte Wins’). It’s like a throwback to the anything-goes golden era heyday of De La Soul, Big Daddy Kane, Public Enemy and maybe even Kid’n’Play – and yet it couldn’t sound any more modern if it reinvented itself every morning. 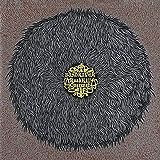 WHY: “Conscious rap has failed us. I don’t like the real didactic, over-handed political jargon that rappers clatter their songs with … I do my social/political jabs mostly at the lefty kids, hippies (and) people like myself; liberal armchair lefties who just kind of bitch and moan but (offer) no counter-myth to what the right wing has done.” Busdriver, as quoted in XLR8R.

WINNERS: Opener ‘Casting Agents and Cow Girls’ is as exuberant as it is crafted; ‘Kill Your Employer’ pulls itself back from its deluge of verse words for a stark, dark, booming chorus; and that sample of ‘Close to the Edge’ on ‘The Troglodyte Wins’ still gets me every time.

WORDS: The lyrics to RoadKillOvercoat fill thirteen pages of double column small type in the CD sleeve. But they’re at their most erudite when heard out loud in sound-bite sizes of satirical persona-pointing: “In the face of that neo-con Nazi/I am no Noam Chomsky/I’m a nagging teen in baggy jeans who fixates on frills as bombs drop free” (‘Less Yes’s, More No’s); “You’re looking for a grievance to mask, preferably with a fetus in the trash/While you eat quiche and laugh on the Champs-Elysee” (‘Ethereal Driftwood’); and the unforgettable observation that “Gay is the new black” (‘The Troglodyte Wins’).

WHINE: Busdriver delivers too much, too quickly, for almost anyone’s good health. But at least he knows as much: “I usually can’t list through all my records,” he said in a recent interview while assuring us this new album “moves” more than its predecessors. And the last song, ‘Dream Catcher’s Mitt’ provides an (overdue?) dull moment.

WEB: The Anti-/Epitaph label site hosts MP3s, videos, press kits and bios. Busdriver’s own web site has not been updated since release of his fourth album, Fear Of A Black Tangent, though it remains a treasure trove of archived information. Farquhar invites you instead to his myspace page, which currently hosts a glitched-up remake of ‘Sun Shower’ and lists the man’s hectic road schedule.

WINE? Busdriver is very much a product of the LA “indie” rap scene, but he’s emphatically all-embracing. I recommend one of those solid value, everything-but-the-kitchen-sink, entertaining Californian blends. Our old friends at Cline recently changed the name of their Côtes d’Oakley to, respectively, Four Whites and Five Reds; Busdriver would probably pour them into the same glass and start rapping about “diluted pinkos”. Join in the chant…