This post goes out in memory of iJamming! Pubber Heggo, who was several months ahead of us all and picked this album up on import last September. His good taste will be missed.

WHAT: Youth Group’s second album Skeleton Jar propelled the previously struggling Australian band into the big time, partly because it was an impressively pure (sub) pop record, and largely thanks to use of the song ‘Shadowland’ on TV drama The OC. Comparisons to Death Cab For Cutie and Coldplay didn’t stop Youth Group from touring with both groups, nor Death Cab’s Chris Walla mixing a cover of the early ‘80s Alphaville hit ‘Forever Young,’ as especially commissioned by The OC. ‘Forever Young’ was an Australian number one, and Casino Twilight Dogs was released to considerable fanfare down under in the summer of ’06; the album is only just out in the USA through the ever-able Anti- label and, criminally, has yet to see light of day in the UK.

The perfectly pleasant ‘Forever Young’ aside, Casino Twilight Dogs contains eleven superb self-written songs, all of which serve primarily to highlight Toby Martin’s gorgeously delicate voice and remarkably attuned lyrics, each of which bring to mind Tim Booth/James and Michael Stipe/R.E.M. as much as they do the more frequent comparisons with their touring partners. (Aside from Martin, the group features founding drummer Danny Allen, bassist Patrick Matthews, fresh from playing bass with The Vines, and new second guitarist Cameron Emerson.) At equal turns dark and ecstatic, Casino Twilight Dogs is the sound of a band on perpetual brink of collective orgasm. The tension is almost unbearable – and quite beautiful. 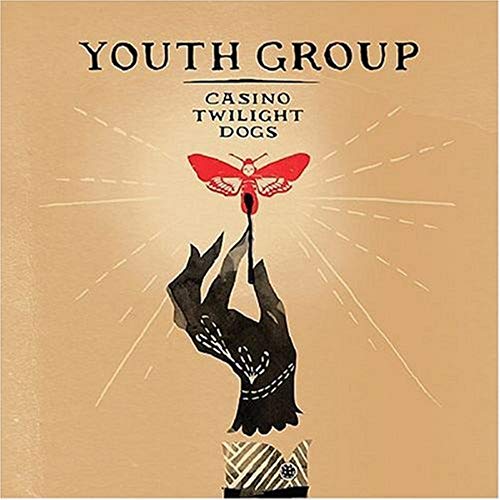 Casino Twilight Dogs is available in the States from amazon.com here, or amazon.co.uk here

WHY: Youth Group are not reinventing the wheel. But their Australian origins enable them to bring fresh sensitivities to a sound that dates back to R.E.M.’s 80s jangly heyday. It also ensures that they’re not just following fashions. Brits and Americans alike can learn much about elegiac pop music from Toby and co.

WINNERS: ‘Dead Zoo’ is a perfectly constructed ghost of a sad song. ‘Under The Underpass’ kicks out terse guitars to evoke its tale of youthful restlessness. ‘Sicily’ is two acoustic minutes of Mediterranean (flight of) fancy. ‘Daisychains’ waves goodbye to a lover with a compassion to rival ‘Everybody Hurts.’ And these are merely the middle four songs out of twelve. There are no losers.

WORDS: Make no mistake, Martin is a poet, with occasional couplets of genius that stop the listener in their tracks. “In the morning,” he notes poignantly on ‘Under The Underpass,’ “we’ll go back to stacking shelves at Woolworths.” On ‘Start Today Tomorrow,’ he sings, “I’ve been watching over you, watching while you’re sleeping, visions slowly come to me of you when you were sixteen.” And on ‘The Destruction Of Laurel Canyon,” he takes the Californian mud-slides of ’05 to lyrically apocalyptic effect: “The gutters become torrents and run down the graceful streets/Like a revolutionary force stamping its foamy feet/The elements of nature they are turned and reversed/Land is sea, air is land, and fire its inverse.”

WHINE: ‘Sorry’ is just too close to R.E.M.’s ‘So. Central Rain (I’m Sorry)’ for comfort, particularly given the clear influence of Athen’s finest on Australia’s latest and greatest. And for all that their perpetual near-climax is the aural equivalent of making love, you do wish at some point they’d just explode. Perhaps then, they’d come (out) with the perfectly aggressive pop song that clearly languishes inside their collective souls.

WEB: Spoiled for choice in an international internet world, you can visit the group’s Australian-centric home page for lyrics and a detailed background of the songs (the single ‘Catching and Killing’, for example, was initially constructed out of Stone Roses and Arab Strap loops); their MySpace page for videos and music; or Anti-’s web site for MP3s. To save you the surfing, use these links:

WINE?: These overachieving former juveniles deserve a wine of similar name, fame and acclaim. Torbreck’s Juveniles hails from a different part of Australia, but is an equally fine example of a country that can – occasionally – sell back to the northern Hemisphere a better version of what it originally imported.
_________________