WHO: 22 year-old Detroit native Randolph Chabot and his band (named for G.I. Joe villain Destro, deliberately mis-spelled to avoid legal complications) release either first or second album (depending how you count these things in the digital age) on the pioneering Ghostly International. 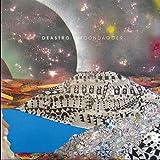 You can get Moondagger through the Ghostly label’s own store, for a limited time, as an 180 gram vinyl LP, a CD and a 320kbps DRM-free download, ALL for just $14. Or you can get the MP3 version now for $7.99. Don’t you love not getting ripped off by major labels anymore?

WHY: From what I can tell via his considerable Internet presence and the live show I caught at the Mercury Lounge the other week, Chabot is full of almost irrepressible energy and a surprising amount of self-doubt. “I’m always questioning myself,” he told the Real Detroit Weekly, which nonetheless named him Artist of the Year. “Do I believe in what I’m really doing? Is it really the best thing I could be doing with my time? I feel like it is right now… I really believe that it is.” Christ, was there something else he had up his sleeve that he felt he could be doing better? Gardening, perhaps? Come on, dude, you’re making amazing music. Accept it.

WINNERS: I love the big fat songs, the ones that almost collapse under the weight of their ambitious arrangements. “Parallelogram” is one. The single “Vermillion Plaza,” with its low-slung 80s-era-gothic verses followed by its high-pitched, MIDI-synth-dripped chorus, is another. The CD Bonus track “The Shaded Forests” is far too good to be a throwaway, full of classical descending synth lines, Bunnymen-like angst, and a melody that absolutely brings something wonderful to mind but, because I can’t quite place it, I’ll credit to Chabot’s own mind. Plus, “Daniel Johnston Was Stabbed In The Heart With The Moondagger By The King Of Darkness And His Ghost Is Writing This Song As A Warning To All Of Us” is more than just an amazing song title; it’s a marvelously grandiose piece of music.

There were times at the Mercury Lounge when Deastro came across as any other 4-piece indie rock band. (Love the cover of Prince’s “I Would Die 4 U.”)

WORDS: Wish I could make more of them out, to be honest. Chabot has a good voice but he deliberately hides it behind his wall of electronic sound. I want to know exactly what he’s saying about Daniel Johnston other than “we’re gonna build this town, we’re gonna build it right.” Elsewhere, “Can you tell me what I feel, is it real, is it right?” on “Day of Wonder” conjures up images of Trent Reznor on his knees a couple of decades ago, though Chabot’s exuberant stage presence at the Mercury Lounge suggests he’s not so much angst-ridden as merely antsy.

WHINE: The aforementioned lack of clarity. The self-produced band is a positive by-product of the digital age, and Moondagger is surely all the better for not having a major label’s hired mix-master softening all the rough edges. So I’ll take the occasional muddiness and hyperactive overload of hyper-creative ideas, and allow that, somewhere in the future, if Deastro sticks with it and the natural course of events follows on, then the act will find itself drawn to make a clearly stated, synth-pop masterpiece.

And then there were times it was apparent that they were being driven by Chabot’s electrics.

WEB: Deastro are poster children for the blogosphere, with EPs, singles, videos, downloads and studio sessions dotted all over the web. I linked to several of these in a previous post about Deastro, here. Since then, Limewire has released an exclusive online EP, and BaebleMusic has put up a video of Deastro playing live at their “apartment” – covering the Penguins’ “Earth Angel,” no less, one of the most influential of all vocal rhythm & blues songs from the 1950s. Additional kudos for such a brave choice.

WINE: Deastro is so jumped-up, so all-over-the-place, so much a product of the 21st Century, that I can only recommend a post-modern blend, one of those low-budget, have-at-it combinations of grapes that are designed both to challenge the status quo and yet also to provide instant enjoyment. Try the Shinn Estate Coalescence 2008, which, as I wrote in my recent round-up of Long Island whites, mixes up Chardonnay, Sauvignon Blanc, Viognier and a relative rarity, Merlot Blanc, for an impressive wine that offers up a seriously alluring tropical nose of tropical fruits, and yet a nice easy finish. You should be able to find this wine for under $15 a bottle – but if you can’t find it at all, go for Sokol-Blosser’s multiple-white-grape blend Evolution, which puts even more grapes into the bottle, at much the same price – and clearly has fun doing so.