The 5th Anniversary of the Invasion of Iraq
has caused many editors in American media to commission op-ed “re-views.” The New York Times published nine short pieces last Sunday from “experts on military and foreign affairs” on “the one aspect of the war that most surprised them or that they wished they had consider in the prewar debate.” In a sadly historic example of revisionist understatement, L. Paul Bremer, the hand-picked “envoy” to a post-invasion Iraq, admits that “I should have pushed sooner for a more effective military strategy,” while Richard Perle, well-known neo-con, argues that while “the right decision was made,” “we blundered into an ill-conceived occupation that would facilitate a deadly insurgency from which we, and the Iraqis, are only now emerging.”

The on-line Slate magazine this week published a much more interesting series of essays; returning to those of what it calls its “Liberal Hawk” columnists who had supported some kind of intervention in the first place, it asked them to answer the question, “How did I get it wrong?” The answers make for mostly sobering reading; they won’t bring back any of the 4,000 dead American soldiers or the tens and hundreds of thousands of dead Iraqis, but they offer more self-examination than you see coming from the Bush Administration. It’s worth noting that none of them (almost all of whom are white males) seem to fully admit that the removal of Saddam himself was part of getting it wrong, nor, in fact, that war itself is a necessarily avoidable goal. William Saletan is particularly prominent here. He offers up a highly self-critical list of personal mistakes, yet keeps his eye on another target:

8. Consider the opportunity cost. The problem with dumb war isn’t that it’s war. The problem is that it costs you the military, economic, and political resources to fight a smart war. Everything Bush wrongly attributed to Iraq turns out to be true of Iran. But we can’t confront Iran with the force it probably requires, because we wasted our resources in Iraq. Americans, having been suckered in Iraq, won’t accept evidence of Iran’s nuclear program. Countries that might have supported us in a strike on Iran won’t do so now, since we led them astray. Our coffers have been emptied to pay for the Iraq occupation. Our troops are physically and spiritually exhausted. In the name of strength, Bush has made us weak.

I wish I’d absorbed these lessons before the war. The best I can do now is remember them before the next one.

Same too, with Josef Joffe, who admits to a casual “why not?” attitude beforehand, and then a subsequent fury with the inept administration.

Alas, democracy in one country is not the antidote to the enormous political pathologies of the Middle East, nor should anybody have expected such a miraculous transformation. Even less so, given the cavalier approach of the Bushies and their Pollyanna-ish belief in the ease of regime transformation: We’ll topple Saddam, hand over power to a friendly like Ahmad Chalabi, and leave. This is not how West Germany and Japan, where U.S. troops are present to this day, were democratized.

The lesson is stark: If you don’t will the means, don’t will the end. To this Kantianism, let us add pure homily: Look before you leap. The tragedy of American power in the Middle East, the most critical arena of world politics, is that the United States ended up working as the handmaiden of Iranian ambitions. 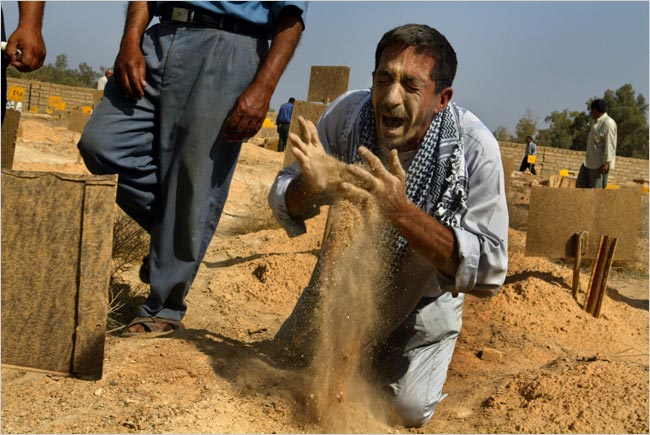 Saddam Hussein… had messed around with anthrax; he had twice started wars in the region (Iran and Kuwait); he had massacred the Kurds and the Shiites; used chemical weapons (no doubt about that); had had a nuclear weapons program (also no doubt about that); and was violating U.N. resolution after resolution (absolutely no doubt about that, either). Saddam was a sociopath, a uniformed button man, Luca Brasi of Arabia. He was a nasty little fascist, and he needed to be dealt with.
I favored the war not for oil or empire (what silliness!) or Israel but for all the reasons that made me regret Bosnia, Rwanda, and every other time when innocents were being killed and nothing was done to stop it.

Jeffrey Goldberg takes a similar line, in what I thought to be the most well-reasoned of all self-analyses.

I wanted very much for the liberation of Iraq to succeed, for many reasons. I wasn’t sure there was an alternative to Saddam’s removal, in part because the sanctions regime was collapsing. I believed that Saddam’s nuclear ambitions posed an almost immediate threat to national security. I believed that Saddam was a supporter of terrorism. The report on Saddam’s terrorist ties released last week by the Joint Forces Command confirms this (not that you would know it from the scant press coverage of the study)…

Mainly, I believed in the human-rights case for armed intervention. I had spent a good deal of time with Saddam’s victims before the war—the Kurds especially—and I had been radicalized by what I learned about the crimes committed against them. I have always sympathized with (New York Times’ writer) John Burns’ position: He argued, at the outset of the war, that Saddam’s regime of torture, rape, and genocide gave cause enough for intervention, without confusing the case with arguments about weapons of mass destruction and terrorism.
…
This is why I find it impossible to denounce a war that led to the removal of a genocidal dictator. To borrow from Samantha Power, the phrase “never again” has in recent years come to mean “Never again will we allow the Germans to kill the Jews in the 1940s.” The Holocaust proved that the world is a brutal place for small peoples, and it defines for me the nonnegotiable requirements of a moral civilization: to be absolutely intolerant of dictators who have committed documented genocides. The tragedy of this war—one of its tragedies—is that its immorally incompetent execution has, for the foreseeable future, undermined this idea. I believe, for instance, that Darfur demands our armed intervention, but we are now paralyzed because of the Bush administration’s handling of the Iraq occupation. 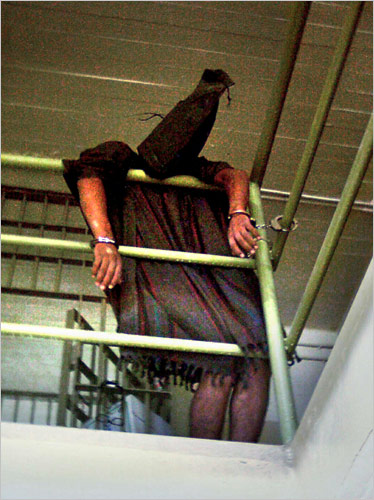 Finally, and perhaps we should have expected this, Christopher Hitchens refuses to admit he ever got it wrong, then or now. Drawing a line back to the CIA’s involvement in the 1968 coup rather than 2003, he insists (as a British expat) that America was always “involved” in Iraq, stating,

“We were never, if we are honest with ourselves, “lied into war.” We became steadily more aware that the option was continued collusion with Saddam Hussein or a decision to have done with him.”

I love Hitchens for his independence, his intellect and his almost joyful contrarianism: there should always be someone willing to argue with conventional wisdom. But I find it hard to excerpt anything else from his column that I can fully agree with: his list of achievements in Iraq sound suspiciously like the President’s (albeit, of course, more eloquently stated).

But it serves to bring me back to my own column on the eve of the war 5 years ago. I don’t have anything like the readership of these columnists up above, but after 9/11, I used the new forum of iJamming! for regular excursions into political debate, and on the eve of the invasion, I offered up a typically and necessarily lengthy list of reasons for and against invasion, then debated them amongst myself, and finally titled my piece, “Why I Am Opposed To The War. For Now.” (As if, once it started, I might be able to change my mind.) I read it back this morning and was slightly reassured. I knew I had harbored a lot of anger back then, not just towards a murderous dictator like Saddam, but to European and American “old leftists,” as I will call them, who seemed willing to leave him in power. Fortunately, I saw enough of the inherent dangers of removing him near-unilaterally as to strongly believe that to do so would be a mistake.

What should Bush and Blair do?,

I wrote towards the end of my self-debate.

Recall the troops and admit political defeat? Absolutely not. I would recommend keeping the troops firmly in place, in effect tightening a noose around Saddam’s neck. I would insist that the United Nations foot a large part of the bill for this army, the only thing that has ever scared Saddam into retreat or disarmament (and don’t suggest a UN force: Bosnia revealed all too tragically how ineffective United Nations peacekeepers can be), while letting the French, Germans, Russians and Chinese have their day to send in thousands of inspectors. I would then share all possible intelligence that would enable the Inspectors to uncover the chemical, biological and intended nuclear weaponry that Saddam surely has and which would vindicate Bush and Blair for their unflinching stance.

I would use these interim months to wage an effective PR campaign, clarifying that this is not about oil or imperialism, and to highlight Saddam’s horrors which are, by any standard, abhorrent. I would further that PR campaign to educate the world as to American beneficence and sacrifice over the years and, perhaps subtly, to let the world know that the Middle East mess can be traced back to former European empires and greedy European businesses just as easily as it can to a current American “empire” or current American commercial interests. All the major players are responsible for this, and all the major players need to work together to get us all out of it.

All along, I would tone down the confrontational rhetoric which has done so much to aggravate European democracies, continue the currently successful hunt for al-Qaeda leaders, demonstrate that ‘nation-building’ in Afghanistan remains a priority, and request that the United Nations itself take the lead on the crisis with North Korea. At the end of the year, we would see whether Saddam had been disarmed, and whether international relations had been improved by the cooling off process. And if not? We’d be in exactly the same place unfortunately. But we would not have fought a monumentally unpopular war.

Cue large sight of relief. There are, however, two sentences in that lengthy column that I wish I could retract. (I don’t say I wish I could “erase” it because actually, I could erase them if I wanted; the modern blogger can be positively Stalin-like to his own past writings.) If you read the column, they will jump out at you for exactly what they were: an error of judgment brought on by an apparent desire for Hitchens-like contrarianism. Most emphatically crazy was this comment on President Bush:

I think he’s a lot smarter than his critics give him credit for.

Ouch! What was I thinking? He was just as dumb as his critics believed and I was stupid to think otherwise. I offered reasons for my own dislike of him elsewhere in the same paragraph, and made perfectly clear I would never vote for him, but still, I had allowed his simple understanding of the equation “Saddam=evil” to intimate some hidden intellect. Wrong wrong wrong.

But we can all be wrong about things in life. And those of who are wrong in print get to live with our mistakes much more than those who are simply wrong after several pints of beer in the local pub. The purpose of the Times and, especially, the Slate re-views, is surely to enable writers to confront their bold statements of the past. Admitting to errors in judgment (and in print) hopefully helps us all avoid repeating the same mistake. To which end, one of the Slate columnists deflects the commission entirely. Timothy Noah responds:

“How Did I Get Iraq Wrong? Wrong question. How did … Barack Obama get Iraq right?”