Posted in Miscellaneous, Politics on April 29, 2011

When I was 17, it was a very good year. Among other brilliant things happening in my life – like having a gigging band and a successful fanzine and starting a record label and finally getting a steady girlfriend – I was fortunate enough to have some sort of a mentor-come-mate relationship with Paul Weller of the Jam, at the time Britain’s biggest, most important and best band. To this day, I know people who won’t listen to the Jam because of Paul’s hopelessly naïve comment back in 1977 that he’d be voting Tory at the next election, but truth is that by 1981 – when I was 17 – he was as staunchly socialist as it’s possible to be while reigning in the royalties. So when Prince Charles married Lady Diana on July 29 of that year, Weller recognized the “Fairytale Wedding” for the farce that it was. On a day that London otherwise shut down, he went into the Polydor demo studios inside the record company offices on Stratford Place, just opposite Bond Street tube, and spent the time recording. As seemed to be the norm at that point – we were in the midst of launching the Jamming! label and in daily contact – he invited me along.

Weller was working that day on a song called “Absolute Beginners,” the title of a Colin MacInnes novel that was doing the rounds amongst a certain subset of young Londoners at the time. I had just read the book and been profoundly affected by MacInnes’ inspired creation of a late 1950s “hip” London teen vernacular (though we didn’t use the word “hip” in 1981), his effortless embodiment of the narrator’s lust for life, his casual recognition of the ruling classes’ inherent snobbery and institutionalized racism, and the tragically breathless depiction of the (real) Notting Hill “race riot” of 1958. (It was called a “race riot” but in reality, it was a violent attack on the neighborhood’s Caribbean immigrants by reactionary, racist white gangs of young men. Let’s go with “racial assault” instead.) The rediscovery of MacInnes’ work – I soon moved on to another of his trio of London novels, Mr. Love and Justice – by a young London crowd was encouraging because it reflected our natural love of literature, one that had been beaten out of us, as had so much other joy of learning, by the antiquated British schools system. 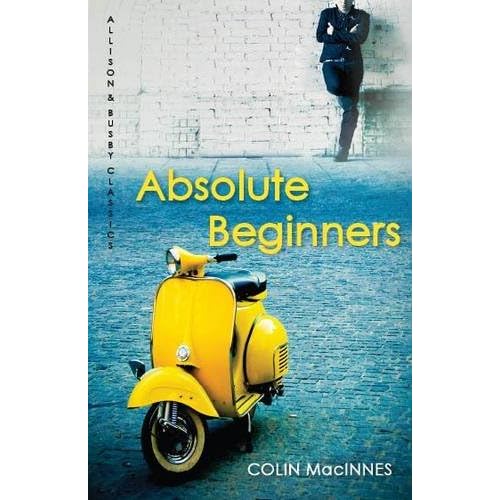 Coming this June: yet another new edition of Absolute Beginners, mod connotations accentuated to the full. More info here. And if you’re new to this subject, please do yourself a favour and avoid the subsequent film adaptation. It has taken years to forgive director Julien Temple for what may have been the worst British musical ever.

Weller, though I thought he was the one who recommended MacInnes in the first place, was at this point the only one amongst our crowd who had not read Absolute Beginners. This didn’t stop him writing a song for it. The lyrics reflected Paul’s increasing love of the poetic form, of metaphor and suggestion, rather than the kind of direct storyline that had made, for example, such a hit of “Down In The Tube Station at Midnight.” Paul’s narrator started out cold and cynical (“I saw no warmth in life, no love was in my eyes”) but at the end of each verse, he accepted the beauty of the human spirit: “The absolute luck is – love in our hearts.” He also returned to the class struggle that had informed three of the Jam’s four (relatively) recent top 5 hits – “The Eton Rifles,” “Going Underground” and “Funeral Pyre” – with the line, late in the song, “Come see the tyrants panic, see their crumbling empires fall, then tell ‘em we don’t fight for fools – ‘cos love is in our hearts.” You didn’t need “O” Levels in English or History to understand that these “crumbling empires” were the stuff of Kings and Queens, that the British Royal Family, regardless of the “fairytale wedding” that was taking place just a mile across Central London, had sent millions of young working class boys off to their deaths as cannon fodder in pursuit of Empire. Recording “Absolute Beginners” that day was Paul Weller’s polite and positive way of saying, Fuck the Royal Wedding.

I loved it. Sure, I was biased; I loved everything the Jam did. Still, I really loved “Absolute Beginners.” I loved the mystery of the poetic verses, the victory of the optimistic finale, the insistence on that anti-authoritarian couplet, and I loved the funky sound of Paul’s rhythm guitars. Paul had been profoundly affected by the rise of a new club culture launched by the “Blitz Kids,” as he was by the post-punk movement’s experimental embrace of American soul and funk. All of a sudden, the Jam’s conventional style – the three-chord thrash alternated with the occasional acoustic ballad – was starting to look a little tired. This was part of the reason that 1981 proved a fallow year in terms of Jam releases: Weller was determined to shake up the group’s writing and recording process, and if that meant going a calendar year without a new album, so be it.

In October 1981, “Absolute Beginners” was released as a single. To the shock of Jam fans who loved their group as a power trio, the final studio version came with the addition of what I would like to call a “punchy brass arrangement” but for the fact that the production succeeded in somehow being tinny and weak, messy and muddy, and all at the same time. As a song, “Absolute Beginners” was a triumph, but it could, from a record company perspective, have done with being sent back for a re-recording or re-mix with a name producer who would have done it justice. The suggestion makes sense in hindsight but at the time, Polydor knew not to even broach the subject: Paul Weller was resolute in his refusal to give up control of the studio.

“Absolute Beginners” entered the charts at number 4, as had “Funeral Pyre” before it, and like that single, it then quickly disappeared. A group that had enjoyed two back-to-back number one singles the previous year, along with a number two album, was beginning to look just the slightest bit lost as the likes of Soft Cell and a re-invigorated Human League beat them to the top of the singles charts. A few months later, though the Jam released “A Town Called Malice”/“Precious,” and if there remains any argument as to whether it was their strongest double A-side, it was unquestionably their most danceable. One side replicated classic Motown, as beloved by the mod revivalists that dominated the Jam’s following; the other delved much deeper into black disco and funk, and this time the Jam got it down. “Precious” can fill the dance floor to this day; “Absolute Beginners” has been relegated to the canon of lesser Jam singles.

Somewhere during the period between the release of those two singles, I remember being casually, and not entirely comically, “blamed” for the relatively failure of “Absolute Beginners.” Apparently, I had been excessively enthusiastic about the song in the studio, to the point that I insisted it be the next single. (I remember that discussion, though not what the alternative A-side may have been.) Paul had, I now came to grasp with some amazement, actually listened to me, assuming perhaps that I had my finger on the pulse of the record-buying public.

Of course, I had nothing of the sort. The public wants what the public gets, after all, and a nation that had been conned into believing that the marriage of Prince Charles and Lady Diana was a “fairytale” was hardly going to be enraptured by the sound of the Jam moving so far off base. I didn’t care then, and I don’t care now. Whenever I listen to “Absolute Beginners,” I think of how I spent my time during that Royal Wedding. Or rather, perhaps, how Paul Weller spent his time – by turning his back on the farce and being true to his creative self. And whenever I hear of a Royal Wedding, and it’s been a little hard to avoid such a topic of late, I think of “Absolute Beginners.” Love is in our hearts!