I Need to Hear Some Sounds That Recognize The Pain In Me – Yeah!

There are some songs I never tire of hearing, and top among them is ‘Bittersweet Symphony’ by The Verve. So my thanks to Jimmy Buff at WDST for playing the song Wednesday lunchtime while I was in the car, and to the DJ at the Virgin Megastore in Times Square for playing it Thursday. Though Richard Ashcroft‘s lyrics are almost absurdly morbid – “Trying to make ends meet, you’re a slave to money then you die” – I find the overall song unbelievably uplifting, and my day is ALWAYS better for it. I’ve played it again today, Friday, to make it three in a row. Nothing wrong with that.

Of course part of what makes ‘Bittersweet Symphony’ so special are those soaring string lines, some of which were famously sampled from the Andrew Oldham Orchestra’s cover of ‘The Last Time,’ as recorded on his Rolling Stones Songbook album. (In the ensusing legal battle, Ashcroft and The Verve were forced to hand over all songwriting credits and royalties for ‘Bittersweet Symphony’ to Keith Richards and Mick Jagger.) I remember seeing that album in a second-hand record store off of Brooklyn’s Court Street in the late 90s. It was priced at $100. When I mentioned that it was the record that had inspired ‘Bittersweet Symphony’ and was really hard to find, the proprieter told me he would probably increase its sale price. When I asked to hear ‘The Last Time’ to learn what lines had been sampled, he refused. That store is now out of business, so there is some justice in this world.

Not, perhaps, if you’re Richard Ashcroft and every time you hear that song on the radio or in a Virgin Megastore, you have to accept that someone else is earning the publishing royalties. Credit then to Jimmy Buff again, for following ‘Bittersweet Symphony’ with the Stones’ original of ‘ The Last Time,’ recounting the preceding story and questioning whether Jagger and Richards really needed the songwriting income. After all, as he pointed out, the Rolling Stones Bigger Bang tour of 2005-2006 is expected to gross $500,000,000. Yes, that’s 500 million dollars. 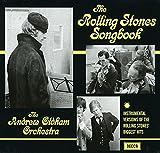 The Rolling Stones Songbook album by The Andrew Oldham Orchestra was reissued on CD in 2004. You can order a copy by clicking the image above. Though if ever a song merited illegal downloading, it would be this album’s version of ‘The Last Time’ by anyone who bought ‘Bittersweet Symphony.’