“I always like to hang out, because, one, it’s a way of avoiding really writing; and, two, sometimes God is a crackerjack novelist and you can plagiarize the hell out of him.”

That’s Richard Price, author of The Wanderers, Clockers and other classics, explaining the five-year silence since his last novel to the New York Times. I’d seen the picture of Price on the front of last Sunday’s Arts section but hadn’t had a chance to read it before heading on Tuesday, to the Lower East Side, the spawning ground for his new novel, Lush Life. Sat at the venerable Veselka on Tuesday, one of my interviewees mentioned the profile, especially Price’s comment:

“A hundred years ago there were Jews trying to claw their way out of here, and now the descendants of those people are paying $2,000 a month to live in what used to be their tenements.”

In researching my own book on the New York music scene(s) and the neighborhoods from which they sprung, this observation seemed more interesting when applied to the kids, many of them Jewish, who moved in to the Lower East Side in the late 50s and early 60s on their way to making it the East Village of beatnik and punk rock fame. They were attracted by cheap rents; the rents were cheap precisely because their parents’s generation had finally clawed their way out of the neighborhood en masse. (The population of Jews on the Lower East Side dropped from half a million to just 20,000 in fifty years.) At least nowadays, moving to Lower East Side may carry some cachet of success; back then, the parents were literally flabberghasted by their kids’ decisions. 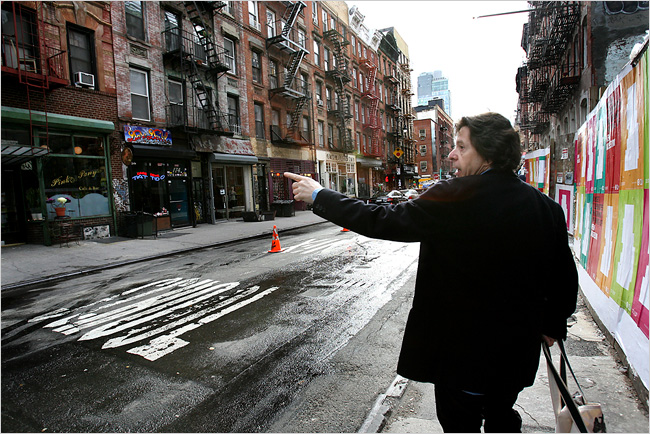 Richard Price on Ludlow Street. When the 1900 census reported the density of the neighborhood at over 450,000 per square mile, the figure surpassed even Bombay to make it the most densely populated corner of the world.

The Lower East Side stuff is perpetually fascinating. We could write about it for ever. (As indeed we do.) But I was most interested in Price’s comments on the process of writing, as per the opening quote. And this:

When he finally, reluctantly, showed the manuscript to his editor, he explained, it felt less like a submission than an intervention. “There was just so much here,” he said, “and I fell in love with everything. I had two novels. It was as if my novel had had a novel. Congratulations, you’ve just had a nine-and-a-half-pound novel!”

As I sweat to contain my current book to 400 pages, it’s reassuring to know that I’m not the only one to suffer from the curse of longevity. Nor indeed from this:

“You never really learn how to write a book, because every one is different.”

Thanks, Richard. That helps. And, comforted by those words, I’ll now get back to my own book.