Current coffee table perusing at our house: Punk 365, a beautifully-presented collection of over 300 full-page photographs, each accompanied by a facing page of short text by our very good friend Holly George-Warren. The photographs, courtesy of such greats as Bob Gruen, Ebet Roberts and Roberta Bailey, run the entire gamet of the punk movement and beyond. That means there’s the predictable slew of shots from mid-70s New York, including the Dictators at CBGBs, Jayne County at Club 82, and a wonderful contact sheet from the back room at Max’s Kansas City, courtesy of Danny Fields. But there’s also a healthy amount of “forgotten heroes” like Teenage Jesus and the Jerks, The Zeros and The Bags, and a refreshing number of British acts from across the ages. My personal highlights of these include Old Tenisonian Don Letts backstage on a Clash tour in 1982, Mark Bedford of Madness spray-painting what looks like a dressing room window, The Jam being interviewed on TV in 1981, The Cortinas posing in the street in 1977 – because it really sums up the secretly joyful nihilism that followed the filth and the fury outrage – and Musical Youth in all their under-age glory in 1983.

Musical Youth? Okay, so Punk 365 stretches its subject to unlikely extremes, but you’ll forgive the occasional transgression, because the pictures, mostly black and white but with plenty in Technicolor, so perfectly capture their moment. Indeed, talking of musical youth, and with a nod of the head to the YouTube clip of Public Image Ltd on American Bandstand that I just saw, perhaps my favorite of the whole collection is of John Lydon passing the microphone to what looks like a 9-year old, in the front row of a PiL show, in 1980. Wisely, George-Warren keeps the commentary to a minimum in this instance, one of those occasions when us writers fully understand that the picture is worth our thousand words – and more. 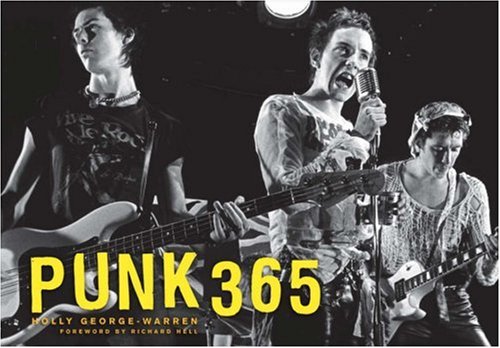