Posted in Miscellaneous on March 4, 2009

It’s not quite as hot a debate as naming the first rock’n’roll single, but it’s an interesting one all the same. Who was the first true rock writer? Who took the role of music journalism away from the PR hacks and fan magazines and turned it into an art form? Music criticism had been thriving in the worlds of jazz and folk long before Elvis and Chuck Berry made records, let alone the Beatles, but you wouldn’t have known it by the paucity of incisive writing on the subject. The general consensus, then, is that the shift in tone from officious reportage to creative journalism took place at some point after 1967, when FM radio took off in the States, Rolling Stone started publication, and the British papers began to allow their own writers to flex their creative muscles.

But I’d like to posit that the wheels were well within motion by that point, and that a considerable amount of credit should go to Richard Goldstein. He’s best known these days for his writings on gay issues, but at the time he started putting pen to the Village Voice paper in 1966 (he later became its editor) it was under the guise of a column entitled “Pop Eye.” Goldstein was 21 at the time.

Goldstein’s greatest talents were his keen eye for detail, and his wry way with words. Together, they made for columns that combined wit and empathy with clarity of insight. An early example came to my attention when, in researching my new book All Hopped Up and Ready To Go: Music from the Streets of New York 1927-77 (to be published by WW Norton later this year), I read his review of a 1966 Velvet Underground and Nico show at the Balloon Farm on New York’s St. Mark’s Place, the ones labeled Exploding Plastic Inevitable by Andy Warhol, the ones that raised the ante for live rock shows and demanded an equally creative response from those whose job it was to write about them. Goldstein, alone among his contemporaries, rose to that challenge. In his review for New York magazine, a vital repository for New Journalism, he called Nico “half Goddess, half icicle,” and if a more delicately accurate description of her has ever been noted, it’s surely only Goldstein’s own one, later in the same paragraph, that “she sings in perfect mellow ovals. It sounds something like a cello getting up in the morning.” 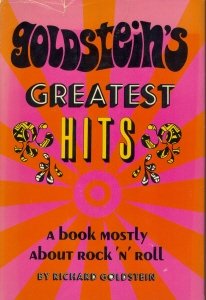 Unable to come up with anything better all these years later, I used those quotes (attributed, of course) in my new book. And having done so, I decided to rent from the library the collection of his early columns, pithily entitled Goldstein’s Greatest Hits: A Book Mostly About Rock ‘n’ roll. Therein, I’m pleased to say, lay plenty more similarly adroit observations, and not merely about the musicians but the pop milieu within which they moved. Here’s Goldstein in the opening column, a 1966 Voice profile entitled “Gear,” in which a young American mod acquires a new pair of trousers. (Twenty years of living in the States and I still can’t bring myself to call them “pants.”)

“They shimmer. The houndstooth design glows against the Formica. Brown and green squares are suddenly visible within the gray design. He brushes the fabric carefully so the wool bristles. He tries them on, zipping up the two-inch fly, thinking at first that he has broken the zipper until he realizes that hip-huggers have no fly to speak of. They buckle tightly around his hips, hug his thighs, and flare suddenly at his knees. He races to the mirror and grins.”

Here he is a year later writing about Leonard Cohen, then a celebrated poet on the eve of releasing his first music album.

“He suffers gloriously in every couplet. Even his moments of ecstasy seem predicated on hours of refined despair. Leonard does not rant; he whispers hell and you must strain to hear his agony.”

And here is a year after that, in 1968, watching Big Brother and the Holding Company in concert.

“To hear Janis sing “Ball and Chain” just once is to have been laid, lovingly and well.”

Goldstein’s ability to share his emotional reactions to music, fashion and sex in such simplistically poetic terms was a rarity in his generation. But while his colorful turn of phrase was sharp as a knife, it was never vindictive, as exemplified in the opening of the Big Brother profile:

“Tonight’s crowd ambles languidly across the floor of Philadelphia’s Electric Factory, a huge garage turned psychedelic playground. Mostly, they are straight kids come to gape at the hippies and fathom the Now. Ten years ago, they would have preened their pompadours before the cameras on American Bandstand. Today, they steal furtive drags on filter-tip cigarettes trying to look high.”

Indeed, as the opening piece “Gear” revealed, Goldstein was as comfortable writing about the unknowns as the celebrities. Two of the better pieces in Greatest Hits, sandwiched in between profiles on the Shangri-Las and Lovin’ Spoonful, are those on a hard-working teenage New York college band destined to ignominy (and with a name like the Druids of Stonehenge, it’s hard to sympathize), and a would-be singer-songwriter about to blow his debut major label recording session:

“Back into the booth for another try. If John Kramer makes it, he will be able to hire fingernails to bite on. But at 3 A.M., he is down to his last cuticle.”

Likewise, Goldstein recognized a couple of home truths about the pop stars that increasingly became his profiles as his writing grew more influential, and he was not afraid to share them. I particularly liked this one, written about Tiny Tim but clearly aimed at everyone in showbiz:

“The underground press has been full of stories about Tiny Tim being mesmerized by his managers. But I’ve never been able to buy that myth. A man is victimized by his own desire, and then finds surrogate figures to shoulder the blame.” (Emphasis added.)

Reading Goldstein’s Greatest Hits reminded me that, in this age of instant blogging, where anyone can share an opinion without having to justify it in advance to an editor (myself, of course, included), we still have standards to meet. Pop culture is not fine art, and you don’t need to pen a thesis every time you write about a new act. But it is incumbent on all of us to express ourselves, and our subjects, in a manner that brings life to the written word. Goldstein set that bar admirably high.

He also had the guts to ask Cass Elliot “Why are you fat?” and in a manner that met not with a slap in the face but an honest and erudite reply. For that you’ll need to read the book.