She’s not an obvious part of the iJamming! demographic, until you look more closely at her life, as she does herself in her recently-published autobiography Society’s Child. Then you realize that Janis Ian’s story is so remarkable that she would have to be an awfully bad writer – and given her latter years penning magazine columns and sci-fi stories alike, there’s little chance of that – for her tale not to prove fascinating.

From interviewing and writing about her for All Hopped Up and Ready To Go, as well as talking to George “Shadow” Morton, producer of her first records, I already knew about the early years of Janis Ian’s life. They read something like this: Child genius born to left-wing parents, a product of the summer camp folk scene, at age 12 has a song “Hair Spun of Gold” published by Broadside magazine and takes to the Greenwich Village club stages; at age 15, in early 1966, is brought to “Shadow” Morton, just as he parts company with the Shangri-Las, and records a debut single, “Society’s Child,” that dares to bridge folk, rock and Brill Building pop and to broach the subject of inter-racial romance. The single is rejected by the label that finances the session (Atlantic) and a dozen others too, but is ultimately released and re-released a couple of times by Verve before Leonard Bernstein puts Ian on major Sunday night CBS TV broadcast, at which point “Society’s Child” becomes a hit and the now 16-year old finds herself suffering death threats in the mail and strangers spitting in her face on the street for her subject matter even as she becomes recognized in the charts as a musical prodigy. She releases a stunningly precocious debut album but fails to follow up on its success until the mid-70s when Between The Lines goes to number one, introducing her second act in this most American of lives

The original Society’s Child. The cover to Janis Ian‘s debut album also doubled up as a songbook, available now by digital download.

And yet that remains but the tip of the iceberg, as her autobiography reveals in intimate detail. There’s the teacher for a father who was forced to switch schools every two years as the FBI tipped off his employers of his Communist beliefs before he could reach tenure. The dentist who molested her while she was under hypnosis. The childhood in East Orange amongst a multi-racial crowd, learning the blues and soul music. Mentorship in Greenwich Village from Odetta, Dave van Ronk and the Reverend Gary Davis. The unfathomable personal pressure that came with finding fame (and a modicum of fortune) at the age of sixteen while being on the receiving end of so much hate and bile. The very bizarre love triangle: she joined an existing couple’s sex life at the invitation of the woman, with whom she thought she already had an exclusive relationship, and after the couple break up takes up residence with the woman, then later the man, whom she marries but who then mentally and physically abuses her. (And you thought your love life had been complicated?!) And that’s before her female therapist breaks all protocol and seduces her (and who later loses her license over the matter). There’s also the small matter of financial ruination at the hands of her accountant, and personal hounding by a vindictive agent at the IRS to make up the debts, which reduces her to living in a miniscule apartment in Nashville, surviving hand to mouth. And the diagnosis with Chronic Fatigue Syndrome that nearly kills her…

Fortunately, there have always been enough people who believed in her to nurse her back to health and drag her back into the studio even if, in the 1980s, the commercial pay-offs became ever smaller. This is why the later chapters make such rewarding reading: in the early 1990s, Janis Ian saw the future of rock’n’roll – and realized that it no longer lay with the major labels. She began releasing her own records, took over her own management, and set up her own web site. Her income went back up, her relationship with her audience grew more personal and loyal. She was invited to write for songwriting magazines, and discovered not just the voice of a columnist, but that of an agitator too. One notable article she wrote in 2002 about downloading during the early storm surrounding Napster, in which she chose to side with the consumers rather than the industry, generated 50,000 hits on her web site in the space of an hour and 2200 personal e-mails commenting on the story. Perhaps beyond the call of duty, Janis Ian set about responding to them all. Along the way, she was asked to give her blessing to a science-fiction compilation of stories inspired by her songs, badgered to write a short story of her own, and discovered a new talent that now runs concurrent to the other ones. And, yes, in case you were wondering, she eventually married her later-life partner – in Canada – and found herself reluctantly at first, enthusiastically later, coming out as a champion of lesbian rights. 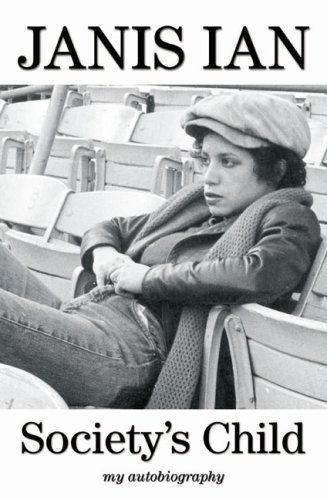 Yes it’s an awful jacket design, but don’t judge Society’s Child – or its author – by its cover.

In Society’s Child: My Autobiography, Ian takes you through this roller-coaster ride in a chronologically ordered, emotionally naked and highly readable style, rarely asking for your sympathy or your pity, but perhaps just your understanding as to why and how she was unable to enjoy her fame the first time around, sinking instead into a sea of depression. “For my eighteenth birthday, I ate half a cupcake.” She trusts that you’ll enjoy her fortune second time around, when a renegotiated contract with CBS resulted in a million-dollar advance. A real one. She had her manager photocopy the check. “I still have my copy, which is a good thing, because I sure haven’t see one since.” She writes well about her music, quoting her own lyrics when they are autobiographical, but the best prose is saved for someone else, the slow decline of her mother from Multiple Sclerosis in a chapter that brings tears to the eyes. “Here is the day her weight dropped below seventy pounds,” she writes in a lyrical manner that reads like a Kaddish, “and they (Medicaid) wouldn’t pay for Ensure because she could still swallow oatmeal.”

Fortunately, the final chapter is (aptly) named Joy. “As much as I try to control the universe,” she writes, “it rolls over me without a qualm, often leaving pain and confusion in its wake. But the older I get, the more I realize that everything happens for a reason.” She then cites a few examples, concluding, “If I’d stayed a big star, I wouldn’t have deigned to do an interview with tiny Vintage Guitar magazine. Because of that interview, my Martin guitar was returned to me, twenty-six years after it was stolen… You see what I mean? Things work out, if you let them. It’s the in-between that’s hard.”

And she remains gleefully impassioned when discussing that that pro-Napster column, archived in full at her web site.

“I was fed up with the record companies’ shortsightedness. Labels that had once been run by music lovers and failed musicians were now in the grip of people who saw music as a “growth industry.” Goddard Lieberson, head of CBS, had taught me how to notate triplets over dinner one night. There wasn’t anyone like that around anymore. The industry was completely out of touch. Label executives didn’t go to record stores. They had no idea consumers were so angry. They’d forgotten that to be allowed into someone’s living room, into someone’s life, was a privilege.”

These days, Janis Ian will come into your living room and perform in person – for a price. $15,000 to be exact, all proceeds going to her personal charity, the Pearl Foundation, named for her mother. It’s a large sum of money, for sure, but for 50 guests (as is routinely the case), it works out at $300 each – or around the price Ticketmaster fleeces you for “good” seats at an arena concert these days. Still, if such an idea remains not only out of your reach, but also outside your musical demographic, do yourself a favor and order up her book from your local store – or, as I did, the local library. Don’t judge this book – or its author – by its cover. The beauty of Society’s Child runs much deeper than that.