I come at this from several angles. Firstly, my ears were prepped to pay attention to The Airborne Toxic Event song “Sometime Around Midnight” by DJ John Richards on the KEXP Music that Matters Podcast #117. While many songs on this radio station’s Podcasts just segue into each other, he made a point of front-announcing “Sometime Around Midnight” as “not a song you want to listen to if you’re anywhere near a breakup. Trust me on this one… A beautiful song.” And though I knew I could trust John Richards, who delivers more great music to my iPod that anyone except his fellow KEXP DJ Cheryl Waters, I wasn’t prepared for just how intensely captivating I would find the song.

Musically, it just builds; let me leave at that: you can hear the song (and I hope you do) for yourself at the group’s myspace page or on its web site music player, or via the YouTube video below. Lyrically, it deserves some explanation. It’s about that godawful night when you attend a party or a gig or a bar and see your ex-girlfriend (the song is gender-specific) and she’s all nice and sweet to you, asks how you’re doing, and you look at her and you still feel for her and you can’t help but remember “the curve of your bodies like two perfect circles entwines,” and you drink a little more in the hope that something might be rekindled between you. But then comes the kick in the teeth: “she leaves with someone you don’t know, but she makes sure you saw her.” And so you drink to excess, and stumble home in tears, just about ready for that double decker bus to crash into you even though – and unlike the Smiths song I’m referring to here – you won’t be dieing by her side tonight.

Sound familiar? It had better do. To paraphrase Chris Rock, if you’ve never been through this, you ain’t ever been in love. (I had the joy of experiencing this precise scenario at my 18th birthday party – it doesn’t get much more memorable than that.) And so, even though you realize, in time, that you made a complete pillock of yourself over her, that shouldn’t prevent you from writing a song about the experience. Kudos to the Airborne Toxic Event for doing so, and for drawing a 44-year old dude like myself back to those love-lorn younger days when we all learned the meaning of “infatuation.” I have no opinion yet about the rest of their debut eponymous album, but “Sometime Around Midnight” is a stone classic.

The official “Sometime Around Midnight” video.

Next, we come at John Richards’ back-announcement, that the group’s eponymous album had received a scathing review in Pitchfork: 1.6 on the indie web site bible’s eternally decimal-conscious rating scale. And that Richards, whose radio station partners with Pitchfork for the site’s music festival, couldn’t excuse the damnation… but that the group had written an interesting response at its own web site.

All of this is old news, I know. The Pitchfork review came out on September 17, the group’s reply appears to have been posted the same day (!!), the KEXP Podcast on which I heard the song was uploaded on September 26, and I heard it a week or so later. The last comment about it on the band’s web site is dated October 13. In the quick-fix, sound-bite self-conscious, twittering facebook world that most indie fans live in, the story is over and done with. For those of us residing in middle age and learning to take the long view, it remains every bit as relevant as Sarah Palin’s presidential qualifications.

Why bring up politics? Because The Airborne Toxic Event appear to have studied Barack Obama’s school of eternal cool, and rather than respond to Pitchfork’s Palin-like attack on their very being (the album is “more inspired by market research than actual inspiration,” critic Ian Cohen concludes, saving his greatest vitriol for “Sometime Around Midnight” itself) with equal rancor and bottled-up bitterness, they take the high road. Their letter is almost universally upbeat, their equivalent of Obama being forced to explain/justify ancient encounters when really he’d sooner be focusing on his own vision for the future. Sample quote: “This band was borne of some very very dark days and the truth is that there is something exciting about just being part of this kind of thing. There’s this long history of dialogue between bands and writers so it’s a bit of a thrill that you have such a strong opinion about us.”

(Actually the band was born of very dark days. According to the NME, “At the start of 2006 (singer) Mikel (Jollet) was diagnosed with a genetic over-active immune system which could cut 20 years from his life. The next day his mum rang to tell him she had cancer. The day after that he split up with his long-term girlfriend.” You wonder of Ian Cohen’s social circumstances.) 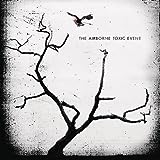 And who comes out the winner in this scenario? Naturally, it’s the Airborne Toxic Event. They have played “Sometime Around Midnight” on Late Night With Conan O’Brien and Last Call With Carson Daly (and yes, overseas readers, those are two different shows, and you wouldn’t want to under-estimate their promotional importance). The song has become a cause celebre. At the group’s myspace page it is closing in on half-a-million plays. It doesn’t cancel out mom’s cancer or the life-shortening disease. But it certainly should help exorcise the ex.

I wrote that “naturally” the Airbone Toxic Event came out the winner, but I paused over the word. I wouldn’t have typed it a year ago. But something has been going on in America this past year, and it’s truly epochal. Relentless cynicism and negativity has ruled the country throughout this decade and longer, a culture of nastiness and fear that is as prevalent in pitchfork reviews that damn confessional rock songs as in a President who leads people to war under false pretenses. It’s a culture of nastiness and fear that the Republican party continues to rely upon through its Presidential ticket John McCain and Sarah Palin, casting false aspersions on Barack Obama that are absolutely the intellectual equivalent of Ian Cohen’s juvenile “review.” And it looks like the public has had enough: with every new attack on Acorn or Bill Ayers, every new mention of the “real America” or “the fabric of democracy,” the real real America decides to stand up for that fabric of democracy while it still has the chance. We could credit this to karma: that the Barracuda and the Maverick are getting their just rewards in this world, or we could credit it to a certain yin-yan, the almost unflappably cool resilience with which Obama has absorbed all these insults, refused the provocations and focused on his own message.

I don’t watch the late-nights with Conan O’Brien or Carson Daly. I usually switch off half-way through Jon Stewart shortly after 11pm. (Kids. School buses. Life. You know.) But last night, I only got back from a school board meeting at 11:30pm and so I tapped into a little of the Colbert Report. And I went to bed thinking, you can’t make this stuff up. There’s a YouTube video of John McCain as keynote speaker at an Acorn convention – “What makes America special is what’s in this room tonight,” he tells the same people he now accuses of perpetrating mass voter fraud, and only 32 months ago. And then come the delightful if not entirely unsuspected news that the Republican Party has spent $150,000 on clothing, hair and make-up for “hockey mom” Sarah Palin in the two months since McCain made her his running mate. (That’s the same Palin who claims an affinity with the newly demographied Joe Six-Pack, the same Palin who represents “real Americans,” most of whom earn well under $50,000 a year and have come no closer to a Saks Fifth Avenue outfit than seeing a model adorn one in a magazine.) And then I wake up this morning and hear that the Wall Street Journal – that bastion of American conservative capitalism – leads its front page with its own latest poll: Obama now leads McCain by ten percentage points.

Judging by the manner in which they wrote their response to Pitchfork’s Ian Cohen, I think its’ safe to say that the Airborne Toxic Event are no McCain fans. And presumably they’ve got hold of their absentee ballots. Because Tuesday November 4 finds them not at their local voting station in California but at London’s Dublin Castle, part of an astonishingly ambitious British tour that finds them playing 30 Dates in 30 Days. (And yes, Hull is on the list.) If Mikel Jollet thinks he’s had it tough so far, he has absolutely no idea what he has let himself in for. Go see them. If just for the one song. Just watch out for those double decker buses on your way home.