The Case Against CDs 1

Some recent enthusing about Sinead O’Connor and cover versions, both here on the front page and over at the iJamming! Pub, led me to order the Collaborations CD, a Capitol Records release that compiles 17 fine examples of her other-worldly voice enlivening other peoples songs. (We only owned, or at least knew that we owned, a few of the recordings, most notably the superb ‘Visions Of You’ from Jah Wobble’s Invaders of the Heart album Rising Above Bedlam.) Collaborations – which was not available on iTunes – arrived in the mail the morning we set off for our little getaway last week, and so we immediately put it on the car stereo. We each quickly noticed that the volumes varied drastically between songs, suggesting they had not been evened out properly at the mastering stage, which reflects badly on the overall packaging of this compilation. But then Posie observed something else, about our favorite Sinead collaboration.
“‘Visions Of You’ is muffled,” she stated. “It lacks clarity.”
And how are you so sure, I asked?
“Because the cassette tape of Rising Above Bedlam is sitting in the car stereo, right underneath the CD,” she replied. “I was playing it just yesterday.”

Yes, the family car comes with a cassette player as well as a CD player, and this enables me to A-B the two versions as we drive. Turns out the wife is right, of course (most husbands will know that anyway): the 15-year old cassette has vibrant middle tones completely lacking from the 1-year old CD. There are those who will have you believe that digital CD reissues must be inherently better than the analog originals simply because theyre told to believe that… and then there’s the evidence to the contrary. Shame on Capital for treating Sinead so shoddily. 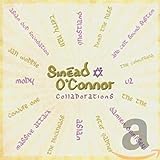