(Including those I had missed over recent months. Click on the album covers to buy via Amazon.)

KATE BUSH – AERIAL (Columbia)
Sometimes, you don’t know how much you’ve missed someone until they return. Back after a 12-year absence from the new release racks, Kate Bush’s voice sounds no less the gift of the Gods than ever before, and on the first of the two Aerial CDs, she uses it to constantly stunning effect. Not only does she pull off the usually abominable musical cliche – an ode to her child, in this case ‘Bertie,’ (“You bring me so much joy… and then you bring me more joy”) – but on the subsequent ‘Mrs Bartolozzi’ she sings of doing the laundry and makes it sound like the most fascinating thing on earth. (Proving that, in her case, she really could sing the phone book and it would be worth our attention!) Throughout the process, the sonic quality of the mix reminds us that albums can – and frequently should – sound this good. 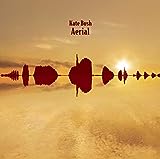 CLAP YOUR HANDS SAY YEAH (Clap Your Hands Say Yeah)
That it’s not all it’s been cracked up to be does not mean it’s not all that. So while the Talking Heads influence too often sounds like imitation, there’s a vibe and a groove and a devil-may-care chaos to the latest, supposedly greatest Brooklynites that merits attention. Just not THIS much attention. HOT CHIP – COMING ON STRONG (Astralwerks)
Wandsworth white boys boast of being the “tightest motherfuckers” while cruising Putney in their Peugeot. They also sing of their ‘Crap Kraft Dinner,’ and of how they’re ‘Down with Prince’ as if we hadn’t noticed their infatuation from listening to them. Throughout, they rumble their way through the world of minimal dance music with an almost embarrassing confidence. Coolest kids on the South London streets? Or too clever for their own (pilfered) good(s)? Though I’m not convinced that Coming On Strong will date well, for the moment the evidence leans in favour of the former. TOM VEK – WE HAVE SOUND (Startime International)
A little like Mark Smith fronting Aphex Twin with a DFA remix. At times. The rest of the time, it’s like nothing much else at all. Still, though he approaches his beats with more pent-up aggression, Vek shares much with Hot Chip: namely, a dance fan’s desire to cover every genre in every song, and a need to sing about escape through driving, a subject he covers on the excellent back-to-back songs ‘Nothing But Green Lights’ and ‘On The Road.’ Just like Hot Chip, he walks the thin line between the truly inspired and the occasionally irritating, and just like his peers across the Thames, he pulls it off. For now. NEIL YOUNG – PRAIRIE WIND (Reprise)
He lost me a little with critics’ favoriteGreendale, but I don’t know if I’ve heard a finer Neil Young album that Prairie Wind. Accompanied by quintessentially restrained arrangements, the 60-year old Young offers unrequited love in ‘Falling’ Off The Face Of The Earth’ and ‘Here For You,’ pays eternally enthusiastic tribute to Elvis in the live-from-the-studio ‘He Was The King,’ and on ‘No Wonder’ (“That song from 9/11 keeps ringing in my head, I’ll always remember something Chris Rock said”) continues to address, if sometimes obliquely, the wider world at large. Just ten songs long – which is all we used to expect from our artists – Prairie Wind get better as it progresses and digs deeper with every listen. The accompanying DVD portrays the songs being recorded with the same simple elegance that marks the finished product. Both discs reach a climax with the hymnal, questioning ‘When God Made Me,’ the finest song written about religion in the 21st Century. Would that we could all be this productive as we approach our pension. OASIS – DON’T BELIEVE THE TRUTH (Epic)
So they’ve barely reinvented themselves, let alone the wheel, but there’s still a renewed sense of purpose to this album lacking through most of their last decade’s output. Forgive the fact that ‘Part of The Queue’ is ‘Golden Brown’ revised, and that ‘Let There Be Love’ is so Lennon-esque that my local hippy rock radio station played it on its Dec 8 Give Peace A Chance day: for the first time since Morning Glory, following an Oasis album to its conclusion does not feel like a chore.

PAUL WELLER – AS IS NOW (YepRoc)
So he’s barely reinvented himself, let alone the wheel, but there’s still a renewed sense of purpose to this album lacking through most of his last decade’s output. Forgive the fact that ‘Pan’ sounds like Billy Joel and that ‘Blink And You’ll Miss It’ fits in with all the other jam-banders on my local hippy rock radio station: ‘All On a Misty Morning’ is a proper Weller ballad like he used to make them, and ‘Here’s The Good News’ shows the Ray Davies infatuation still serving him (and us) well. For the first time since Stanley Road, following a Weller album to its conclusion does not feel like homework. VARIOUS ARTISTS – JUST SAY SIRE (Rhino)
If, like me, you were a young Brit buying records in 1978, you knew Sire not only as the New York label that had brought us The Ramones and Talking Heads, but as the label that picked up (and broke big) our own Rezillos and Undertones. If, like me, you then moved to America and bought records from the mid 1980s through the early 1990s, you knew Sire for signing every British band that could play a guitar or synth – and in the cases of Depeche Mode, Echo & The Bunnymen, The Mighty Lemon Drops, Primal Scream, The Farm, The Smiths, Modern English, Aztec Camera, My Bloody Valentine, Ride, and, oh yes Tin Tin and his timeless ‘Kiss Me,’ breaking all of them big too. In the meantime, astute Americans also knew Sire as home to The Replacements, k.d. lang, Tom Tom Club, Ministry, Ofra Haza, Wilco, Lou Reed, Book Of Love, and Ice-T. (Among others.) And somehow along the way, Sire founder and undying music fan Seymour Stein also licensed hits by Madness, The Beat, Blancmange, Seal and The Bluebells. Oh, and then there’s that small matter of signing – and breaking – Madonna.

So yes, every one of these acts – and many many more – is included in the 3-CD, 1-DVD box set Just Say Sire, and no, not every one of them has perfectly stood the test of time. But no other American label could possibly put together such a far-reaching compilation that so perfectly marries the credible with the commercial – while still offering something more personal than a corporate logo. Sire, we thank you.