I recently finished reading music journalist Rob Sheffield’s memoir, Love Is A Mix Tape, the contents of which are better summed up by its subtitle Life and Loss, One Song at a Time. Sheffield, of Boston Irish stock, was living in Charlottesville in the grunge–friendly nineties, you see, and he met this wonderful southern gal, Renée, and despite their differing backgrounds, they fell in love over their mutual loves in music, and they got married, and they were hoping to live happily ever after – until May 11, 1997, Mother’s Day by unfortunate coincidence, when, while Sheffield was in the kitchen making cinnamon toast for lunch, Reée dropped dead in front of him of a pulmonary embolism. He was a widow at age 30.

In his book, Sheffield recounts all this through reference to his mix tapes. It’s a fine premise, offering a solid backbone to the book. After all, the pain of losing one’s life partner so young is an experience (fortunately) shared only by a precious few – but who amongst us has never made and/or treasured a mix tape? And yet I couldn’t help looking at the track listing of Sheffield’s mix tapes, listed in imitation cassette liner at the start of each chapter, and saying, I couldn’t listen all the way through to this one. Whether included for irony or merely a mark of bad taste, I would have to fast-forward past this song. And that one. In fact, if I saw the contents of this tape before playing it, I probably wouldn’t play it.

But that’s mix tapes for you. The best of them become so personal that they form part of our DNA, so that we remember exactly where we were in our lives when we recorded or were gifted them. Sheffield certainly does – especially those he made with Renée – and who can blame him? His account, by the way, is a breezy but always emotive read; he asks not for your sympathy, (though perhaps some empathy), and is at his best when he moves off subject and deals with the sheer fetal-position pain of his lengthy mourning. (He eventually cured it by moving to Brooklyn.) The book didn’t touch me to the extent that I had hoped – it might be because his knowledge of American alt-music is countered by his ignorance of British indie – but I recommend it all the same. 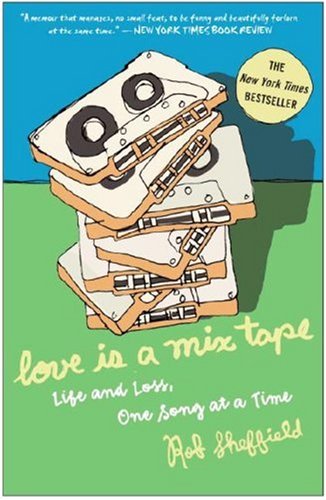 Love Is A Mix Tape is Rob Sheffield’s memoir – and Pretty Much Amazing’s Podcasts are modern Mix Tapes.

The mix tape of Sheffield’s youth – and mine, and yours I trust – did not die out with cassettes. Our local kids make them as party favors at their pre-pubescent birthday parties; they just use CDs instead. Campbell’s friend Jack just gave out for his tenth birthday that is all the more fun for every other song being by the Dave Clark Five. And I recently made one for a great friend who was getting married on the other side of the world; each track was personally chosen with the couple’s relationship in mind, and segued to tell both a lyrical and musical story. It is quite possibly the best mix tape I’ve ever made – and yet, equally likely, that holds true only for myself and its recipients. You, having no reference point, might hate it.

I mention all this because I live off of Podcasts these days, especially the longer ones that keep me up to date with new music. Some of them are presented as radio shows: NPR’s excellent All Songs Considered is the textbook example. Others are out-and-out dance tapes: the Ibiza Voice weekly mix, of which I’ve mentioned several times, is the benchmark of that format. The others fall in a gray/grey digital-era area, neither mix tape, radio show, fish nor fowl. KEXP’s weekly Music That Matters Podcasts bunch up three or four songs together and then front-and-back announces them. The Tripwire Podcast does the same thing but with about 15 songs at a time over a hefty two hour transmission that does my head in it includes so many acts I’ve never heard of.

And that’s why I’ve fallen in love with the Pretty Much Amazing Podcasts. I found the site over the holidays when looking for MP3s for my New Year’s Eve party and wrote about its excellent Podcasts of (and online links to) the best remixes and best covers versions of 2008. I’ve been hooked ever since. Producer Luis Tovar, who is also PMA’s editor, keeps them relatively short – around 45 minutes, one side of a good mix tape. He doesn’t put himself into the show whatsoever; you get the tracklisting by looking at your iPod, just as you’d get the track listing for a mix tape by looking at the cassette box. His choices are inherently commercial indie rock and rap, with a penchant for groovy remixes, a profile that’s right up my street. Although he’s got access to all the latest MP3s, he doesn’t lay his hipness down upon us nor does he feature exclusively new or unknown music. Best of all, he has a DJ’s sense of sequencing: he knows where to start and end a mix, how to tell a musical and lyrical story in-between, and the delicate art of seguing from one song to another without jarring the listener.

Without Podcasts, I’d be even more out of date with new music than I am. Turns out the Asteroids Galaxy Tour song “Around The Bend” was used on an iPod Touch commercial. The YouTube video has been viewed a mere 500,000 times already. Still, if you want to know how I get to post so frequently at iJamming! it’s partly because I don’t watch TV commercials.

I’m especially enthralled by the latest, “Gimme That Hot, Hot Love” podcast. The title comes from “Around The Bend” by the Asteroids Galaxy Tour, a salacious, sleezy, brass-topped, sung-spoken electro-clash trip-hop pop dance song you might already know if you watch TV. For me, Asteroids Galaxy Tour were but one of two acts on the mix that I was previously unaware of; the other, Don Diablo, closes out the Podcast with the appropriately rambunctious “Get On The Floor.” Elsewhere, we get a remix of Radiohead’s “Reckoner” and the same act’s “Fifteen Steps” in honor of that seminal Grammy performance, a 2002 demo version of a new Regina Spektor Song, an abfab remix of Vampire Weekend’s “The Kids Don’t Stand A Chance,” Peaches’ cover of “Search and Destroy” (presumably in tribute to Ron Asheton) and her remix of The Bird and The Bee’s “Fucking Boyfriend,” Phoenix’s excellent if overtly contemporary new “single” “1901,” and Jay-Z’s “Brooklyn Go Hard,” which is either a mash-up with Santogold or she’s a guest vocalist (Tovar doesn’t tell us in his notes and I’ve run out of head space to figure it out).

I’ve listened to “Gimme That Hot Hot Love” at least half-a-dozen times now. In the office. Out running. And while running round the office with the kids (we do that!), remote in hand before The Bird and The Bee’s swearsong comes up. I’ve learned to relish the subtle relevance of each song’s inclusion at this moment in space and time – February/March 2009 – and I delight in Tovar’s effortless musical (and lyrical) segues. At no point have I ever felt the need to skip a track. And that, my friends, is the moment at which a Podcast becomes a Mix Tape. This one gets saved to the hard drive.

Stream or Download the Pretty Much Amazing “Gimme That Hot, Hot Love” Podcast