George Goldner’s Tico Records was to 1950s mambo music what Russell Simmons’ Def Jam was to 1980s hip-hop: it pretty much defined the genre – and then claimed ownership of it. Everyone who was anyone in mambo recorded for Tico: Tito Puente, Tito Rodriguez, Machito, Joe Loco, Arsenio Rodriguez, the list goes on. Once the LP format was popularized in the mid 1950s, Tito Puente released eighteen albums on Tico before departing for RCA and the big time, and some of those have remained available in second-hand shops or been re-released over the years. The pre-LP period has been less easily accessible, a great shame given the number of recordings and the depth of their quality. In the early 1950s, Puente released eight four-song “Volumes” of Mambos for the label (alternating with his great rival, Tito Rodriguez); in 1952 alone, he delivered an astonishing 37 sides to the label. Most of these were released across Tico’s astounding catalogue of 200 78rpm “singles,” and the majority of those looked to have been mostly lost to the sands of time. 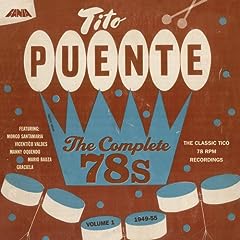 Not so. Fania Records, as part of its relentless reissue campaign, recently released Tito Puente: The Complete 78s Volume 1, and this month adds Volume 2. It’s an exceptional and essential addition to music libraries, the birth of a movement as much as it is the sound of a legend. The recordings date all the way back to 1949 and the highly influenial “Abanaquito,” and they progress well into the 1950s, though specific dates of sessions and releases are not given. (Having traced and tracked George Goldner’s business career for my current book, this is no surprise; let’s say he was not the most meticulous of book-keepers.) I have just gotten my hands on Volume 2, a double CD of 40 cuts that includes a dozen or so great mambos, some featuring Willie Bobo and Charlie Palmieri amongst Puente’s strong line-up of players, but also many recordings fronted by the great Cuban singer Vicentino Valdes, which better represent the Latin popular vocal music of the time than they do the dance vibe that filled the Palladium night after night. Those who want historical high-energy may prefer to stick with Volume 1, itself a double CD of 40 tracks that includes contributions by Mongo Santamaria and Mario Bauza – or wait for Volume 3 and 4, by which point that will mean some 80 of Puente’s ancient Tico recordings will have been made available on CD. Will that render the series truly complete? Perhaps. But then Fania can get on to releasing the Tico label’s other great “lost” 78s to the public – assuming the tapes still exist. 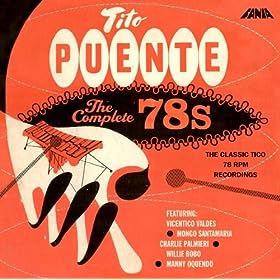 The double CDs retail in America for just $17 a piece. (Or at least they do at Amazon: check here and here.) Visit the Giant Step pages to hear specific tracks from Volume 1. And if you want to load up your iTunes with something for the weekend, then courtesy of Giant Step, you can download Tito Puente’s “Willie and Ray Mambo,” from Volume 1 right here.