Now that the historic American Presidential election is over, there are some words and terms I hope to never hear again. “Sarah Palin” is one of them, but it doesn’t look like that wish will be granted. So let me move on to my prayer that the term “Bradley effect” be relegated to the dustbin of history – where it already belonged.

The first time I heard about the so-called “Bradley effect” – the notion that certain white voters might say they would vote for a black man, but then, when lever came to pull, would refuse to do so – I thought it referred to former Senator and basketball star Bill Bradley, who ran unsuccessfully in 2000 for the Democratic Presidential nomination. But then I remembered that he was white. Once I heard that the Bradley effect referred to Tom Bradley, a black candidate for Governor in California in 1982, whose polling numbers turned out to be much higher than his eventual vote, I was taken aback.

1982? Here are some of the things I had yet to hear about or imagine back in 1982: the Falklands War, the miners strike, the Style Council, Michael Jackson’s Thriller video, the collapse of the Berlin Wall and communism, acid house and ecstasy, the Taliban, Happy Mondays, Osama Bin Ladin, the Stone Roses, cell phones, personal computers and the internet. In addition, I had heard not of Michael Jordan, Venus Williams, Tiger Woods nor, for that matter, Emile Heskey, had yet to learn of Jesse Jackson, David Dinkins and Bernie Grant, and considered it about as likely that I would be living in New York City in six years time as that I would be paying my taxes in the hippy village of Woodstock twenty years after that. 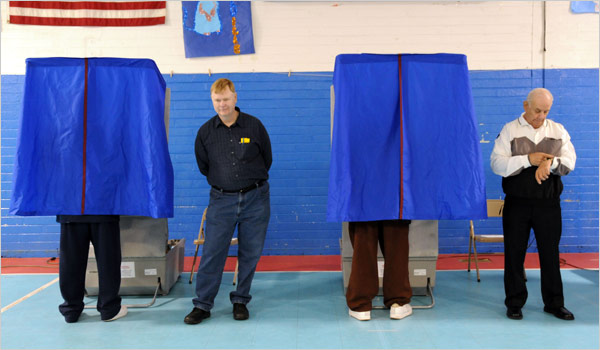 In short, in an industry where polls are conducted daily (we saw a poll on Obama’s “approval rating” last night, over two months before he becomes President!), what the hell is anyone, in the media or otherwise, doing reciting 26-year old polling information as “evidence” for an election in the year 2008? So the pollsters got it wrong in California in 1982, at time when non-white politicians were still the exception, not the norm. Big deal. At least the pollsters learned from their mistakes for, as it turned out, they were remarkably accurate in their predictions 2008 American presidential election.

The media, on the other hand, were so busy chasing their tails on this ludicrously cited “Bradley effect” that they failed to observe a very different trend taking place. Let’s call it the “Levittown effect.” Levittowns (note the plural) were an invention of sorts – a marketable ideal at least – that changed the face of American society. Beginning with the initial Levittown on a former potato field on Long Island in 1948, and continuing through further Levittowns in New Jersey, Pennsylvania and Puerto Rico, Henry Levitt of Levitt and Sons offered city-dwellers a new life in their Levittowns, where a limited choice of detached house designs on quarter acre lots came complete with white picket fences and low mortgages. They were the new American dream – if you were white. And if you weren’t, tough. Because blacks were not allowed to buy into Levittown. Levitt said that “he could not take a chance on admitting Negroes and then not being able to sell his houses.” (A similar argument saw Met Life refuse to allow blacks into Stuyvesant Town in Manhattan, but that might be a story for a different day.)

An early family of settlers at Levittown on Long Island

The great songwriter Ellie Greenwich grew up in the original Levittown on Long Island. New York Times journalist Michael Sokolove grew up in the Levittown in Pennsylvania. It was his reporting on attitudes there that caused Obama to make his “one big gaffe” of the Primary campaign, the one where he said of blue-collar voters that “it’s not surprising that they get bitter, they cling to guns or religion…” And that, in turn, had an effect on the Democrats of Levittown, Pennsylvania, for when it came time to vote in the Presidential Primary, they went for Hillary Clinton over Obama, by a ratio of 3-1.

Sokolove returned to Levittown on November 4, 2008, spending the day “inside the Magic Cottage preschool in a section of Levittown called Appletree.” There, Obama defeated McCain by 682-388, and yet, Sokolove wrote, “Not a single one of the more than 60 Obama voters I talked to said they had voted for him in the spring.” Sokolove offered reasons for their change of mind, which included the economic collapse, and the benefit of five additional months spent getting to know him. I was more interested, however, in the fact that some Levittown voters told Sokolove that they ended up casting for Obama despite his being a black man:

“I have to admit, his race made my decision harder,” said Joe Sinitski, a 48-year old heating and air-conditioning technician. “I was brought up that way. And I don’t like his name. I’ll admit to that, too.”

The potato fields from which Levittown was carved

Yet Sinitski voted for Obama nonetheless. The council president of Bristol Township, which has the highest concentration of Levittown voters, said she had endless conversations with constituents who said they would not vote for Obama.

“Most of them couldn’t give me a real answer why,” she said. “I had some of them reciting those stupid e-mails saying he was a Muslim. I would just say to them, ‘You’re against him because he’s black.’”

But at the end of the day, they weren’t against him. In the four jurisdictions that comprise Levittown’s voters (and more), Obama defeated McCain, 41,110 to 25,034 – a much greater margin than his overall 11% victory in the state of Pennsylvania. In Appletree, the number of Obama voters actually exceeded the number of registered Democrats.

So, what was going on here? Sokolove claims that among those who had not expected to find themselves voting for Obama, “self-interest trumped racism.” Maybe. But I think it’s more profound than that. I think the passage of time trumped racism. These middle- and old-age Americans, brought up in a racially institutionalized suburban community, where black people were banned from living amongst them, had the first opportunity of their lives to vote for a white President over a black one – and they voted for the black one. They saw right past Obama’s color, right past the prejudice some admit to having been instilled in them, and voted the man they believed was best for the job. In an exact turnabout of the so-called Bradley effect, they told the pollsters they would not vote for the black man, and yet they did so, all the same.

This, then is the Levittown effect. And put into practice across the country, it proved every bit as important to Obama’s election as did his appeal among those younger, urban voters who already live in a multicultural society and couldn’t wait to pull the lever or touch the screen in favor of Hope. The Levittown effect may not be one for the ages – this is an older generation, after all – but then nor was the “Bradley effect.” And that hardly stopped anyone. Until now.