The tourists taking pictures on 42nd Street. But off what, exactly? A neon MacDonald’s?
The New York Public Library on 42nd Street and 5th Avenue; one of New York’s most beautiful buildings and greatest institutions.
The staff member at the Humanities Division who helped me find old copies of New York’s underground press, to the point of issuing me with day passes for the private libraries at both Columbia and NYU.
The no-questions-asked self-service policy in the Humanities Division: every single issue of the New York Times Time Newsweek Life Village Voice Washington Post LA Times etc ever published, available for examination on microform and printing without approval or wait time. Colindale, are you listening?
The Beatific Soul exhibition at the NYPL: Jack Kerouac’s notebooks, drafts, letters and homophobic anti-Semitism on magnificent public display. (The 60s missed you, Jack.)
The On The Road scroll: one hundred and twenty feet of taped-together architectural paper on which Kerouac typed one of the world’s great novels – from his apartment on West 20th Street. (The 70s missed you too.)

The G Train. One of new York’s most feared subway lines is now one off its busiest.
The Fillmore at the Irving? Sorry, but a couple of old Bill Graham posters does not the Fillmore make.
The Up Against The Wall, Motherfuckers of the late 1960s who forced Bill Graham to give local residents a weekly night at the real Fillmore East.
The goth girls at the Siouxsie show who thought that just because I had a VIP table I had to stay seated so they could stand behind me and have a perfect view. If you’d ever been here on a really crowded night, girls, you’d know you were lucky you could even squeeze in to the balcony at all.
The deli on University that sells the One True Natural vegan Thai/Chinese food: the perfect midnight snack when you’ve been running round all day and forgotten to eaten,
The Secret Night of Science at Love: DB still DJing d&b after all these years.
The drum and bass remix of the Nouvelle Vague cover of The Cure’s “A Forest.”
The Saturday morning line at Choice Bakery opposite the Clinton Hill housing project, in New York’s newest revived brownstone neighborhood.
The rat on the subway tracks at Clinton-Washington. I’m glad the old New York still exists somewhere in the City.
The 75% off sale at Triple 5 Soul the day I decide to shop there.
The 50% off sale at Supreme ditto. Hey, my winter’s longer than yours.
The polenta-mushroom dish at Bread on Spring.
The Nero d’Avola at Bread
The relatively good prices at Bread
The hopeless wait-staff at Bread: I guess you get what you pay for.
The sloping dance floor at the Blender Theater at the Gramercy.
The notion that a crappy pop-rock monthly should have a theater named after it. Enough with the sponsorship already.
The downstairs bar at the Blender. But why close so early?
The East Village Other.

The East Village as it used to be.

The GPS maps in the New York City cabs. But surely part of the joy of riding a yellow cab late at night was that you never knew where they were taking you!
The credit card machines in the New York City cabs. But surely part of the joy of getting a cab back to Brooklyn late at night was that you’d actually run out of money to do so!
The bar at the W Hotel on Union Square. The best place in the neighborhood for a sophisticated late night drink – without attitude, believe it or not.
The wine list at the Bar at the W on Union Square. Not sure when I last saw all three bottles of the Tres Sabores Zinfandel in the same place. (No, I didn’t order them.)
The proper pour in the proper wine glass.
The waitresses at the W. Particularly ours.
The recently passed law that allows us have restoppered and take home the bottle we no longer needed when my friends didn’t show up to share.
The waitress who even got us a carry-bag to take with us. Sometimes you get what you pay for.
The cost of going out in New York City. Just as well I stay in five nights a week in the country!
The late night apartment parties. Hedonism redux.
The local Brooklyn livery cabs of which nothing has changed. The “five minutes” assurance of arrival is still thirty, the driver still doesn’t speak English, and he will still take you three sides of a square across Brooklyn when you tell him which way to go. Do I not miss them.
The Sunday lunch session in Park Slope with three of my old neighborhood buddies.
The Commonwealth: No strollers! 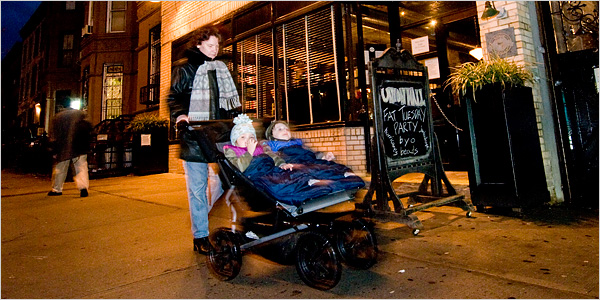 Park Slope as it is today

The Delegates confusion. Why would the so-called Democratic Party want to strip its voters in Florida and Michigan from having a say in their party Leader – especially after what Florida went through in 2000? And are we any closer to understanding the nature of a Superdelegate?
The $3275 one-bedroom apartment in Peter Cooper Village. And the idea that it’s somehow meant to be a bargain.
The lack of foot traffic on Warren Street. Alright, so it’s a cold day in winter, but that never stopped the kids playing on the street.
The surfeit of fusion on 5th Avenue. Doesn’t anyone have an original idea anymore?
The pizza at Port Authority. Better than it has a right to be.
The buy back.
The bus back.