The Night Is Theirs: Youth Group in concert

There’s been lots of great music released this year already, but the album I keep coming back to right now is one that actually saw light of day, in its Down Under home, last summer: The Night Is Ours by Youth Group. Regular readers know that I have a thing for this Australian quartet; put simply, there’s something about them that just turns me on. Still, The Night Is Ours is a darker album than its predecessors, Casino Twilight Dogs and Skeleton Jar (I haven’t heard their debut album Urban and Eastern, or their other pre-2004 EPs and singles), and more restrained in its production. In fact, this is a group that could benefit from a top-notch producer: I can only fantasize of how these songs would sound with someone like Eno (if not necessarily the man himself) building up their foundations and filling in the coloring. Because of this sparseness, The Night Is Ours took longer to fall in love with, but hopefully that just means that it will continue to grow on me. Certainly, Youth Group share with acts like R.E.M. and James not just a certain poetic tendency, a certain yearning character, but an ability to make albums that keep luring you back in. 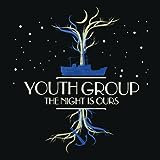 Youth Group’s main calling card, unquestionably, is singer-lyricist-guitarist Toby Martin, whose last name has helped emphasize understandable musical comparisons to Coldplay’s lead singer, but whose role model would appear more obviously to be Death Cab For Cutie’s Chris Walla. (The two groups have become close friends; Walla produced the group’s earlier hit version of “Forever Young” and appears on the song “Two Sides” from The Night Is Ours.) Martin sings frequently in a pitch just short of a falsetto, a tendency that grates in most singers (even Thom Yorke) but in his case, serves only to emphasize the emotional import of his lyrics. And they’re words to treasure, generally delivered in deceptively simple zen-like haikus. Try the opening sentence of “Good Time” (“I had myself a good time and now I don’t feel like myself”), the Morrissey-esque delivery on “All This Will Pass” (“You’re as lonely and as desperate as a kettle boiling with no one there to get it”), and the similes of “A Sign” (“Your lips speak Italian, your eyes speak in tongues, are you like that with everyone?”). They cover a refreshingly wide take on the human condition, too: “One To Another” is about someone in rehab or a hospital of some sort, “Friedrichstrasse” about a person moving to Berlin for sexual decadence, and “All This Will Pass” (arguably the album’s strongest song, and available as a free MP3 stream/download) directed at a woman who has made some sort of catastrophic error in her relationship.

It’s hard to imagine Youth Group’s appeal without Martin, but it’s important to celebrate the entire act: on the new album drummer Danny Allen, lead guitarist Cameron Emerson-Elliot and bassist Patrick Matthews choose their moments carefully, holding back so that every note, every percussive instrument, every synthetic overdub is clarity itself. The group’s cohesive structure, born of long-term friendships, is evident throughout.

Youth Group are well known in Australia, but that’s a country where 15,000 sales nets you a gold album; in other words, a difficult place to carve out a permanently prosperous career. And so, determined to make an impact in the States, they decided with The Night Is Ours’ overdue release to set up shop on the east coast and spend a month playing residencies: Mondays in Boston, Tuesdays in New York, Thursdays in Philadelpia. I got down to New York for the second Piano’s show, on April 14th, happy to find the club full, and thrilled that the group went on stage dead on the ascribed time of 10pm, given that I drove down and back especially to see them. Unfortunately, Martin had some throat trouble that, when he failed to reach a high note on the second song, “Friedrichstrasse,” suggested that we might be in for a rough show. Though he was able to mostly stave off any further disasters, I remain curious to know whether the group’s almost spectacularly quiet delivery was business as usual, or a purposeful attempt to help him out. For if I’d expected the live show to ratchet up the recorded music’s restraint several notches, I was to be disappointed; there were times at which I felt like Youth Group could have given Low or Belle and Sebastian a run for their money.

Certainly, talent runs deep in Youth Group, with all members singing, Allen using a glockenspiel, Emerson-Elliot playing E-bow, and both he and Martin playing portable keyboards. At Piano’s, the three supporting musicians were all sporting Brooklyn-hipster facial hair, compensated for by Martin’s fresh-faced appeal and easy-going way with the audience. The set was dominated by the new album, of course, with “Daisychains” and the exquisite “Sicily” serving notice of Casino Twilight Dogs’ high standard while the finale, “Shadowland,” from second album Skeleton Jar, raised some smiles from my companion Patrick for its undeniable New Order influence. It wasn’t the transcendent experience I had hoped for, to be absolutely honest, but given that I’ve played The Night Is Ours at least once a day ever since, it must surely have had a positive effect.

After winding up their east coast residencies this week, Youth Group take off on a cross-country haul which they’re anticipating with almost pathological optimism, Martin stating for the record that is was “looking forward to… driving down a road I have never been down in my life, into a town I have never visited, finding we are playing in a great venue with friendly people who feed us (unheard of in Australia!), playing a show to people who have actually heard our music, and then getting drunk with a whole bunch of new friends, shouting across the roof of America, fall down, getting up and then doing it all again the next day.”


Youth Group have spent the month of April living in a “flat” in Brooklyn while playing residencies on the East Coast. Above clips shows them rehearsing a new song “Lead You In.”

We’ll see how he feels a month from now – although we can always check in en route, given that Youth Group have set up a YouTube page which they’ve already loaded, since coming Stateswise, with a live rehearsal of a new song in their temporary Brooklyn “flat” and a Baltimore street-busking performance of “Sicily.” I was a little taken aback to find they only have 25 subscribers to the channel (and less than 200 people following their Twitters); this may speak to the absolute surfeit of digital information options in the indie world right now, or it may just reflect their continued lack of a Stateside following. To my ears, Youth Group sound perfectly suited for young American audiences, but I’ve been wrong far too many times before to trust my judgment. Let’s just say that if you ever felt like you shared my taste in indie rock, you owe it to yourself to spend some time with Youth Group.