2) So that’s why they call it Spring Cleaning
Tony gets oddly inspired to mop the bathroom floor Saturday morning. This happens once a year at best; probably something to do with taking a two-week sabbatical from proper physical exercise and trying to find some less strenuous but equally masochistic alternative. 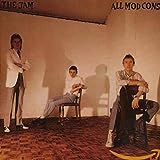 3) All Mod Cons
Haven’t listened to this Jam album the whole way through in many years. I had not expected it to age this well, nor to still sound so angry. Odd lyrical couplet aside, I was astounded by its brilliance. The fact that I was mopping the kitchen floor while singing along to ‘Mr. Clean’ has no relevance on anything.

4) Having half an hour to talk to neighbor at the Post Office.
See item 2. It’s amazing what you have time for when you don’t spend the weekend on the ski mountain.

Levon Helm Studios in Woodstock on a beautiful spring day. Off the beaten track. But only a little.

5) Kids Ramble at Levon Helm’s studio.
Two local musical trends coalesce. The “kids music” movement has been gathering steam nationwide for years now, and it’s especially strong in the Catskills, where so many music-making parents, having resettled with their families, have also learned the to appreciative playing for an audience of kids. (As opposed to a possibly combative audience known as ‘The Kids.’) Levon Helm’s Rambles have also become a local phenomenon; the former Band drummer began hosting Saturday night concerts in his Woodstock barn a few years ago, and with surprise guests like Elvis Costello and Emmylou Harris, it’s no surprise that they’re now over-subscribed, and over-expensive. For the first fully sunny Saturday of spring, Helm opened the barn at lunchtime for a special Kids Ramble, featuring Elizabeth Mitchell and Uncle Rock. The day could not have worked out better: free barbeque, popcorn and design-your-own cupcakes, plenty outdoor space for low-attention-span kids (like Noel) to run around in, and two great shows. Levon Helm himself played drums for Elizabeth Mitchell and Daniel Littleton, whose set included her own toddler-type songs about spelling and animals, but also featured ‘What Goes On’ by the Velvet Underground (“everyone’s favourite children’s music,”) ‘Train Train,’ a Carter Family song, and a ‘Bo Diddley’ that managed to also incorporate lines from ‘Surfin’ Bird,’ ‘Papa-Oom-Mow-Mow’ and ‘I Want Candy.’ Our own Uncle Rock was joined by Katie Taylor, Josh Brown and others for a full band performance of his own satirical, upbeat songs like ‘Too Many Presents,’ ‘Disco Nap’ and ‘Sugar Talking,’ along with great covers of R.E.M./The Clique’s ‘Superman’ and Steppenwolf’s ‘Magic Carpet Ride.’ Uncle Rock’s own kid Jack Warren joined him on vocals, and I was particularly taken by the two kids – a seven year old on stage, and Brown’s two-year old son, hiding in the shadows – who “played” their own toy guitars throughout. I recognize how “precious” this whole kids’ music thing can sound, but if you were with us on Saturday, you’d have to have been opposed to the very concept of breeding not to have come out smiling.

Levon Helm sits in with Elizabeth Mitchell and Daniel Littleton. Hey, it’s his barn, he can play if he wants to.

6) Chocolate vs. Chocolate.
On Route 212 between Woodstock and Saugerties is a tiny enclave of three little stores, two of which opened recently and will do more damage to your waistline than an all-you-can-eat buffet at McDonalds. Lucky Chocolates is an artisinal chocolate store that bravely experiments with all kinds of flavors (like chili), and toppings (like salt). The chocs aren’t cheap (I spent $8 on 6 miniature truffles) but like great wine, you’re happy to savor the taste rather than stuff your face. And then there’s the Corner Store next door, which specializes in English food from McVities, Heinz, Cadburys, Mr. Kipling and co. This stuff is not as hard to find as it was in the late 80s, but there’s still nothing like an aisle full of Chocolate Digestives, custard creams, sponge puddings and bakewell tarts to inspire a bout of childhood nostalgia. In my case, it is only nostalgia, not longing: the fact that I used to pig out on all this stuff all day long (along with saveloys and sausages and pickled onions and bags full of chips from the chip shop) doesn’t mean I have any desire to return to such an unhealthy lifestyle. It’s unfortunate that much of the food Britain is famous for is so bad for you, if you allow that the UK is so progressive on so many other issues. But taking the store owners’ word that British “sweets” have less sugar than American “candy,” I compromised and, along with the Heinz baked beans, picked up a Curly Wurly and a Star Bar. Oh, and some Plain Digestives of course.

7) The Little Shop of Horrors.
Bought this movie on VHS for a quarter from the local library. Campbell and I watched it Saturday night and pretty much fell off our chairs laughing. I always thought this Roger Corman B-movie was accidentally bad. It’s not. It’s intentionally hysterical. And where is Jack Nicholson anyway?

8) End of the Season Pinball Blues.
If I hadn’t injured myself and then still insisted on doing last week’s Triathlon, I might have stretched the ski season into April. But with my two-weeks self-imposed lack of exercise to restore my muscles, we stopped by Hunter Mountain Sunday morning to unload our lockers instead. The slopes were looking sad, tired and rather brownish-green. Campbell and I treated ourselves to one more lunch snack, one more go on the pinball machine, and then, goodbye winter sports. You were all too brief this year.

9) Hiking in snow, ice and mud.
That lack of exercise? It didn’t deter us from a short hike off of Platte Clove Road. The path was an odd mix of wet snow, slippery ice, and pure mud, and it took us over 90 minutes to hike barely two miles. But you try going faster than that with a two-year old and an eleven-year old, each of whom seem to be able to do anything at all – jumping on ice in the middle of a stream being popular with both of them – except walk in a forward direction.

The spring in spring.

10) Home to The Rhône
The other nice thing about not working out? It’s easier to drink wine. (Less dehydration in the system.) Here’s to a weekend back on the Rhône. Cheers, Paul Autard, Philippe Guigal and Daniel Brunier, I missed you all.