What I’m Reading: The Likes of Us

THE LIKES OF US: A BIOGRAPHY OF THE WHITE WORKING CLASS by MICHAEL COLLINS

PREMISE:
White South-East Londoner Michael Collins writes a defense (in the guise of a history) of the white South-East London working class, portraying them as a complex indigenous cultural group frequently belittled and betrayed by social investigators and, especially, middle class white journalists. 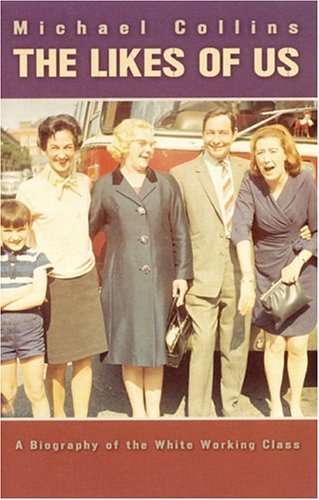 Order through amazon.co.uk (Not published in the States.)

APPRAISAL:
It’s a book of two halves. For “An Excavation,” Collins traces the history of the Borough of Southwark – specifically, the Elephant and Castle, Walworth Road, the Borough, Old Kent Road etc. – through that of his ancestors, the likes of Tom Larter and Nell Hall. He spends hours in libraries, digs up countless newspaper stories, quotes endless social studies. Frankly, and despite the good intentions, it’s tedious. For a people whose lives typically revolved around the local pub and street market, who celebrated community and loved the idea of a decent knees-up, he makes them sound awfully boring.

For “An Evocation,” however, Collins deals with his own life experience growing up in the neighborhood, witnessing the changes brought on by post-war slum removal, supposed urban regeneration, encroaching immigration, constant deprivation and, ultimately, as part of his epilogue, middle-class gentrification. (The white Elephant that is the Elephant and Castle roundabout remains a constant throughout.) This is more like it; the writing is crisp and personable, and the anecdotes and observations highly recognizable not only to anyone who knows firsthand the criminally “brutal” high-rise estates of which he writes, and the often insular side streets over which they tower, but, I suspect, to anyone who came of age anywhere around an inner city in the 60s, 70s and 80s. (That said, the title is a misnomer. This is a biography of the White Working Class of South-East London only.)

Collins treads difficult waters in the latter pages of the book. He cautiously addresses the crime statistics used so freely used by the National Front in the 1970s, offering example after example of arguably well-meaning but ultimately prejudicial findings by pressure groups and left-wing journalists alike whom, he believes, not only further alienated his culture but whom also condescend to the notion that any attempt by the white working class at social uplifting inherently makes them Tories and thereby traitors to their roots. (It’s not surprising that he finds Julie Burchill one of the few sympathetic newspapers columnists; it is, however, an act of dubious back-scratching that he quotes her so frequently in his latter pages and receives a blurb from her on the front cover as reward.)

Still, Collins doesn’t attempt to defend the rotten apples, especially those under the scourge of modern drugs and the allure of violence, and he’s particularly eloquent on the mixed blessings of “white flight” which, he notes, serve often only to transport an area’s problems, rather than solve them. His personal stories, especially upon revisiting the area, carry more than a hint of the same journalistic reportage he claims to so disdain, but they are nonetheless imbued with a confidence that comes from knowing he is, quite literally, on home ground. He comes up to date with the Stephen Lawrence murder and the settling of the elite middle class media types in streets they once feared to walk and claimed to disdain, but he doesn’t really know where the future lies and his long journey lacks for a palpable finale.

PROSE:
Writing of the Victorian babies still alive in the 1970s, like his aunt Nell Hall, who made it to the age of 99,

“These were the characters from another era who were gradually vanishing like local shops and houses, many of them with one or two decades on the clock. They were ill-equipped for the present, having come of age in an era when to reach adulthood was a blessing, to meet middle age a bonus, and to live beyond retirement a veritable miracle. Those living alone appeared to be most at odds with the modern world. They dreaded the rumble of the distant bulldozer that began to make its way into the neighbourhood, almost as much as they once feared the doodlebugs and bombs.”