Anyone who has read my web site long enough knows I believe that “everything’s connected.” And often, those connections unfold in ways we haven’t anticipated but rightfully welcome. For example…

Last Saturday, Posie and I attended a dance entitled I Ka Nye (Art/Family/Our Lives) at our neighboring Mount Tremper Arts. The African dance was accompanied by superb percussion work courtesy of Obo Addy, though he broke at one point for a pertinent boom box rendition of James Brown’s “Cold Sweat.” Something went off in my head when that music went on: Didn’t James Brown once play a massive concert in Africa? Something to do with the Rumble in the Jungle, that legendary fight between Muhammad Ali and George Foreman ?

Before I had time to look up the answer, I got an e-mail. A group of us up here meet once a month for Rock Doc night. Basically, we gather at someone’s house, order pizza, open some beer or wine or soda or whatever, and watch a music movie. Usually the host gets to choose the film. We’ve run the musical gamet, from Heavy Metal in Baghdad to the Roky Erikson documentary You’re Gonna Miss Me to The (Klaus) Nomi Song – and lo and behold if this week’s hosts didn’t suggest the recently released Soul Power: A Documentary on the Zaire ’74 Music Festival, the very concert that had crossed my mind but 24 hours earlier. 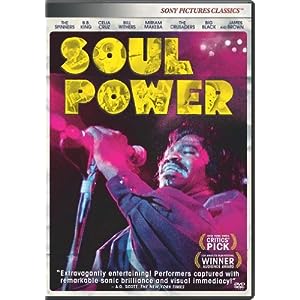 We watched it last night. It’s not much of a documentary, to be honest, but the performances are sensational. Being ten years old in 1974, my own heart was into the tail end of glam rock and the start of a reassuringly brief fascination with hard rock. Soul Power seems to suggest that the best music of the era was coming from somewhere else entirely. Artists featured at the three-day festival in Kinshasha included not just James Brown but Miriam Makeba, the Spinners, Celia Cruz and the Fania All Stars, Bill Withers and B. B. King. It’s hard to pick a favorite; every performance is amazing its own way, from Withers’ riveting solo set to the flamboyant Afro-Cuban dancing and percussion of Cruz and her band.

Sadly, the movie only runs 92 minutes. Barely half of that is music, which allows only one song an act. (Two for Mr. Brown.) One hopes – prays – that somewhere in the vaults, the full performances remain preserved, and unedited. God knows they’d make an incredible DVD collection.

But that’s not really the reason for mentioning it. As the Zaire 74 logo came up, time and time again, on screen, it occurred to me that 1974 was also the year Zaire played in the World Cup – for the one and only time. They were the first sub-Saharan country to make it to the World Cup. And between that, the Rumble in the Jungle and the Zaire ’74 Music Fest, the people must surely have felt that they were at the vanguard of the new Africa. 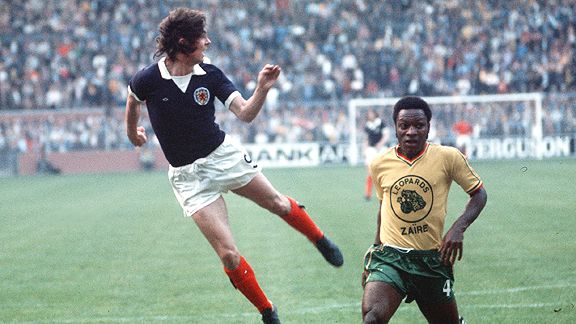 Who could forget Zaire’s joyously unsuccessful romp through the World Cup of 1974 – or their wonderful shirt?

Certainly that was the mood at the time. A road-side billboard in Soul Power reads something along the lines of “Black Power around the World is a Dream. In Zaire it has already arrived.” Muhammad Ali gives an interview in which he compares the peace and harmony he has discovered in Zaire with the daily doses of rape, murder and racism taking place in his American birthland. James Brown sings “Say It Loud, I’m Black and I’m Proud” to a crowd of 80,000 black Zaireans. And Miriam Makeba seizes the opportunity of a foreign stage to castigate the apartheid rulers of her own homeland, South Africa.

So it occurred to me, too – because how could it not – that we were watching this movie on the very eve of the first ever World Cup to be hosted in Africa: South Africa, where apartheid finally collapsed, and with relatively little bloodshed at the end. Who would have thought that back in 1974? For its own part, Zaire no longer exists. The government of Joseph Mobuto, who is discussed in somewhat benign terms in Soul Power, turned into a dictatorship, the country became one of the most corrupt in the world, and in 1997 he finally fled (some say that the West stopped backing him after the end of the Cold War). The nation subsequently reclaimed its former name as the Democratic Republic of Congo. If that was meant to symbolize a new era of peace and prosperity it has sadly proven otherwise. The DRC has become embroiled in civil wars spilling over from neighboring Rwanda and Uganda, wars that show no signs of abating. By some estimates, 45,000 people die every month as a result of the warfare. Rape and mutilations are common place.

There is one more point of reference here. I’d be amiss if I didn’t seize it. Only last month, I read a disconcerting story in one of our many excellent Hudson Valley magazines, Chronogram, called “The Playstation War.” In it, journalist Tim Freccia wrote of the civil strife in the DRC:

Numerous militias have rampaged through the east (and still do), funded by businessmen who reap enormous profits in the uncontrolled trade of minerals including cobalt, copper, tin, gold, diamonds, and coltan. Coltan is a key mineral that, once refined, becomes tantalum—a significant ingredient of capacitors, which are used in an expansive array of small electronic devices such as cell phones, laptops, pagers, and other electronic devices.

Eighty percent of the world’s supply of coltan lies in DRC. [Apparently, the country supplies less than 10% of the current supplies.] The recent conflict there has been referred to as “The PlayStation War,” with the activist website “Towards Freedom” claiming “millions of dollars worth of coltan was stolen from the DRC to satisfy the West’s insatiable appetite for personal technology,” with Rwandan troops and rebels using prisoners of war and children to mine for the “black gold.”

It’s something I had mentioned to my son, Campbell, who loves his Playstation (and his Wii, and his MacBookPro etc.) and who is, at heart, a total pacifist. It’s something I mentioned again last night, on the way home from Rock Doc. It seems like almost everything we strip from the earth’s core – be it oil from the Gulf of Mexico, cobalt from the DRC, diamonds from South Africa – comes at a price we can’t afford, because the profits breed greed, corruption and violence. And yet I don’t pretend to have the answer: for all that I like to consider myself environmentally conservative, I drive a car, I use a cell phone and laptops. I may once have bought my wife a diamond ring. Or was it sapphire? Either way, I have no idea what kind of suffering (if any) was engaged in its mining.

Ultimately, I remain an optimist about all this; it’s the only way I get through. And when I watch movies like Soul Power – even though the dream of a peaceful black nationalist Africa has crumbled in Zaire – they continue to give me hope. If nothing else, we have the music. And, of course, football, the beautiful game. Enjoy your World Cup.