This August, approximately 60,000 people will descend on the Black Rock Desert north of Reno, Nevada, for Burning Man. Not surprisingly for something now in its 29th year, Burning Man has given birth to multiple smaller festivals, some of which consider themselves regional Burns, others which have simply taken the Burning Man ethos as a starting point for their own festivities. By coincidence rather than design – or rather, by ill-planned design, which is more in the Burning Man spirit – I pitched tent at two such events this spring: the third Lucidity Festival, held in southern California the weekend before Easter, and the fifth “Country Club” as hosted by the Disorient Camp of regular Burners, in the Catskills over Memorial Day weekend. (My younger son Noel joined me at both; the whole family made it to the Catskills camp.) The two events were different in size, exclusivity, and commerce, but they especially exemplified the existing differences in America’s coastal cultures. To wit:

Lucidity’s mission: “Begun in 2012 with Lucidity’s first incarnation, over the course of the next few years, we will explore, in total, six major chapters of the mythic journey.
Disorient’s mission: “At the crossroads of reality and possibility, Country Club is blissful self-reliance meets interactive participation on a massive natural 3d scale. Let go of expectation and shift into the elements.” 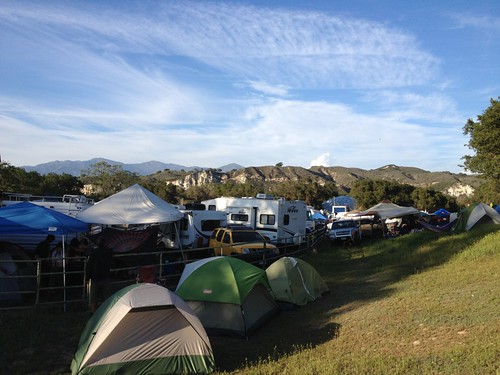 Lucidity map: Printed on a souvenir bandana gifted on entry.
Disorient map: If you found your way to the location, you can certainly find your way around it.

Lucidity line-up. Check the detailed schedule on the Guidebook app you should have downloaded to your iPhone. (Good luck the keeping iPhone charged, though.)
Disorient line-up. All DJs operate on Burning Man time. And by the way, there’s no cell coverage.

Lucidity weather: Surprisingly cold overnight and when foggy. Which was all day Saturday.
Disorient weather. It’s the Catskills. Showers all days Saturday, uninterrupted sun Sunday and Monday. And so bitterly cold on Friday night that an impromptu fire pit was built on the dancefloor.

Lucidity sound curfew: Midnight. It’s a State campground.
Disorient sound curfew: Are you fucking kidding me? This is our weekend away.

LET ME ELABORATE on the Lucidity dance music theme:
There were a few reasons that I felt old at Lucidity. Throwing my back out on the first morning, to the point that I couldn’t walk, was one of them. Being around so many people of college age was another. But not being able to identify (with) their dance music was the most prominent. Although there was some variety around the various Lucidity stages, the vast percentage of DJ music was what the Californians call “bass,” a music so popular that there are outdoor DJ festivals dedicated to it almost every single weekend. (Check the poster here for “Emissions,” sub-titled “West Coast Bass Culture,” with a line-up of DJs that was entirely alien to me.)
I understand the 30-year journey that took us from house to techno to rave to jungle to dubstep and on to bass; I have enough remixes from Lucidity’s British headlining performer Tipper, dating back to the 1990s, to identify with his roots. But having abandoned that journey with jungle, I now feel like a stranger. Put simply, Californian bass with its jerky, spastic, glitchy rhythms, its deep but unsettled sine waves, and its purposeful lack of grooves, melodies and vocals, doesn’t speak to me in any way, shape or wave form. (Visit Tipper’s SoundCloud page for an idea of how he DJ’d at Lucidity.) At Lucidity, this disconnect went beyond personal taste; given the extent to which the outdoor dancefloors were filled with young West Coast hippies, all clearly devoted to the music (despite the incongruity between their laid-back daytime nature and the full-on nighttime rhythms), it felt generational.

LET ME ELABORATE on the Disorient live music theme:
House is too simple a word to describe the dance music that dominated at Country Club; it bore little resemblance to the piano-driven classics of the late 1980s. But the word techno, for me, has tighter parameters still, and there wasn’t much by way of those endlessly acidic grooves with their repetitive hi-hats and thumping 909s. The DJs at Disorient Country Club positioned themselves mostly in the middle, locking into the high 120s bpm rhythms that percolate and flex, that wibble and wobble, that get inside your skin and play havoc with your neurons, but which are generally upbeat and evoke good vibes. (Visit the Disorient Country Club page and listen to the audio feed for an idea of the dominant groove.) Could I name much of what I heard? No, my trainspotter days are far behind me. But it was the kind of groove that I could listen to all day and all night long – which was just as well, as it went on for 48 hours almost uninterrupted!
Posie particularly enjoyed Saturday afternoon, when we sheltered from steady spring showers in our tent, catching up on reading as would never happen back at home, grooving to the steady soundtrack that emanated from the decks down by the pond (and which took a welcome diversion into dub courtesy of one of the camp organizers who looked a few years older than my good 50-something self). I especially enjoyed Sunday afternoon, when a morning spent reading by pond-side (while Posie sneaked home for a shower!) dissolved perfectly into a lunch-time set of wonderful Ibiza-style grooves courtesy of a DJ who’d come of age back on the east coast rave scene of the 90s. The dance music picked up tempo each night once the sun went down, and we – Posie especially – made the most of it. But while the younger crowd kept going long after we’d returned to our tents, neither of us felt out of touch, or even old, as a result. In short, these were my people, and this was my music, and it was reassuring to realize that, at Lucidity, it hadn’t been about age. It was indeed just all a matter of taste. 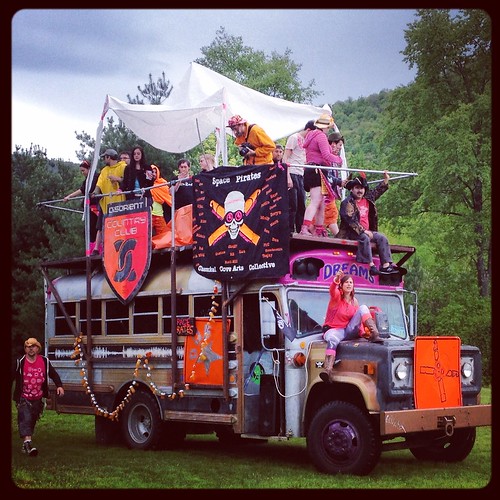 Lucidity Art cars: Many. Though the only one that appeared to be mobile was the one with the propane pipes.
Disorient art cars: Two. Space Pirates and the Ky Hole, each of which did their best to make out like they were at Burning Man.

Lucidity Art Galleries: One. Top quality, courtesy of Branches mobile gallery. DJ Dalai Lama in the house! And plenty of people painting, on site, even if all of them were seemingly competing for the most lifelike Roger Dean tribute album cover.
Disorient Art Galleries. None.

Lucidity Ponds or Lakes: None. And the river was all but dry. That is some serious drought the Californians got going.
Disorient: Ponds or Lakes: One. Complete with paddle boat.

Lucidity showers: Yes. But $3 a pop for mostly cold water.
Disorient showers. No. But the pond was free. And freezing.

Lucidity low moment: Throwing my back out big time getting food out of the cooler on the Saturday morning.
Disorient low moment: Having to go home.