WHAT: 35-year old Adam Freeland wrote and performed Cope’s dozen strong songs with vocalist/bass player/guitarist Kurt Baumann, and can now be found taking them on the road with the addition of drummer Hayden Scott. Which is not to say that Cope’s vast electronic sound clashes are all entirely self-performed; as per any club-friendly record worth its salt, there are several guest appearances, including the Pixies’ Joey Santiago and Devo’s Jerry Casale – which give you an idea of the demographic Freeland is aiming for. 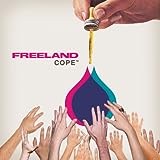 WHY: “I’ve always mixed rock into my sets anyway, so having a band is just a natural progression from that,” says Freeland. Indeed, he has always been something of a rock fan’s DJ: I remember being particularly taken with the anthemic sounds of his year 2000 studio album, Tectonics. The only question surrounding his group, then, is what took him so long?

WINNERS: “Under Control” benefits from the instantly recognizable vocals of the current master of the dance-rock crossover, LCD Soundsystem’s James Murphy. Wait a minute, apparently that’s Baumann on the mic. Well, then, it will surely benefit from the listening public’s likely supposition that it’s Murphy half-speaking, half-singing over some stomping bass-heavy big LCD-like beats. “Only A Fool,” featuring Devo’s Casale, is more successful in its vocal individuality, while the vast, pseudo-operatic nature of the instrumental “Mancry” is greatly aided by the louder-than-bombs percussive breaks contributed by none other than Tommy Lee.

WORDS: Not Cope’s strong point, unfortunately. It’s worth noting that the aforementioned “Mancry” and the Chems-like techno-thriller “Best Fish Tacos In Ensenda,” two of the album’s only instrumentals, are also two of its strongest cuts. And while I like “Under Control’s” assertion, “Don’t buy the hype about it ‘cause this ain’t 89,” such a line only makes me even more convinced that, on this track at least, Baumann is James Murphy in disguise.

WHINE: It’s a common complaint against almost anyone who steps from behind the deck: we get great grooves, blinding beats, voluminous vocals, and yet a sense that we’re lacking for classic songs, the kind that will ensure this album is remembered as something other than a valid attempt to lively up the dancefloor and take the beats into rock clubs. I don’t hold this against Freeland the man or the group; you’re either born with the knack for writing hooks or you’re not. But truth is, Cope has everything but the song you can’t live without – and that includes the (ironic?) inclusion of David Essex’ 1973 hit “Rock On.”

WEB: For the time being, at least, Cope is being streamed online: in fact, the player is embedded at the bottom of the review, which allows you to agree/disagree with my own observations in a mere heartbeat. Remember the days when you used to actually buy a record sound unheard, based entirely on a writer’s review? Well, your kids certainly won’t! Visit Freeland elsewhere on the web here and here.

WINE? Since running the Burlington marathon, I’ve been in more of a beer mode. And to be honest, Cope feels like more of a beer-drinker’s record, not so much because of laddish connotations, as that it pumps so hard that you feel the need to quench your thirst, rehydrate and pump up the carbs. I was especially impressed by the mix of beers in Vermont’s Otter Creek 12-pack: the micro-brew Summer Ale is a wheat ale with a pleasant citrus edge, light enough that you can drink it while dancing.