There’s something almost infuriatingly laid back about the Texas indie scene. In this biggest and arguably most contradictory of American States, groups make albums, barely advertise them, and tour them, if at all, at the most grass roots of levels. Then they come back and do the same again. And again. And again. The prospect of music as a “career” seems like an afterthought.

Last month, I profiled Austin’s Okkervil River, who have been quietly but prolifically recording since 2002. This week it’s the same music city’s Explosions In The Sky, whose sixth album this decade, All Of A Sudden I Miss Everyone, was released in March – and which, as per its predecessors, is entirely instrumental.

The term “post-rock” was coined around a decade ago for bands like Tortoise and Mogwai who, as per Explosions In The Sky, prefer to create epic (if not always noisy) expanses of sound out of their guitars and drums rather than hunt around for catchy melodies. “Post-rock” makes sense, in that it suggests something boundary-breaking while serving to remind of the “prog-rock” of the 1970s that got us in such an awful mess (that we had to have “punk rock” to get back out of it). But terms of any kind put limitations on groups whose very M.O. is to have none. Besides, when I hear Explosions In The Sky, I think “space-rock.” As their name suggests, there’s something other-worldly about their music: I’d like to think the Astronaut who ran the Boston Marathon this week – in zero-gravity space – had Explosions In The Sky on her iPod. 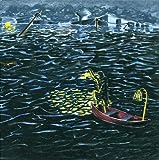 ‘Welcome, Ghosts’ is the second of six tracks on All Of A Sudden I Miss Everyone, available on Temporary Residence Limited in the States and Robin Guthrie’s Bella Union label in the UK. Circular guitar lines by Mark Smith and Munaf Rayani are alternately given ample room to breathe, or otherwise subdued under the force of heavy guitar chords and the driving rhythm section of bassist Michael James and drummer Christopher Hrasky. Somewhere in the middle, a kick drum or tom comes crashing down the third beat beat of each bar, with so much distortion you may find yourself concerned about blown speakers; a key change then takes the track to another dimension. It’s carefully crafted music that requires more concentration on the part of its maker than listener: “This album was the hardest for us to write,” they note on their web site of a record they made in the woods of Minnesota. “And also the hardest to record. But it’s the one that we’re most proud of.”

Explosions In The Sky – whose myspace page is titled ‘texasband’ in possible homage to Air’s secondary name as ‘frenchband’ – are currently on tour in Europe. Unfortunately, the storms that pounded the east coast and played havoc with air travel this past week forced the cancellation of their opening dates in Glasgow and Manchester, though the London date last night (Thursday 19th) apparently survived. These are the kind of travails you have to deal with when you’re an indie band making your own way in the world. But it seems safe to say that a little stormy weather will not deter a group that appears to have longevity written all over it.