None of the preceding adventures came with a price for admission, which is one of the reason to love the great outdoors. It’s also a reason to dread ski season, which always puts a significant dent in our family’s meager bank balance. Then again, we made a conscious decision to live in the heart of New York’s ski mountains, and I count my blessings every day I can head out to one of the four local slopes on a “work” day and be back by lunch – or when I can take the kids at a weekend, knowing we’ll be home for dinner while others are traipsing back to the Big Apple and its suburbs. And anyways, the cost of a lift ticket or season pass is perfectly favorable compared to that of following a major league spectator sport. (Chelsea away, anyone?)

They don’t make them like this in the Catskills

But one consequence of our local lifestyle is that it necessitates an either/or situation with regard to hitting the major ski resorts out west (or, in my dreams, the Alps). I don’t have the £705,400 that a British commodities broker dropped on a three-week family ski trip this past year – and if I did, believe me, I’d make it last a hell of a lot longer and cover far more of the world’s powder spots. No, though I get my 30 days in a year on the Catskills mountains, my only other trip out west took place back during a briefly flush moment back in 2006.

All of which is to say that it was a BIG deal for me when I booked three days at Mammoth Mountain onto the front end of a Smiths’ bio promo trip to California in January 2013. And it made it at even bigger deal when I arrived at LAX, running a couple of hours late already and suitably frantic, to find that my connecting flight up to the mountain had been canceled. Given that I only had 72 hours R&R ahead of me, I quickly confirmed that I could get my flight reimbursed, promptly boarded took the first car rental courtesy bus that came along, fruitlessly haggled over the cost of a Jeep, then drove 300+ miles of clogged LA freeway and largely desolate Californian highway, up a 9000ft climb from sea level to the peaks of the Sierra Mountains, arriving at Mammoth late at night in a haze of snow and ice. I was so damn wired by the time I checked in to my room that, despite having been up the best part of 24 hours, I barely slept.

Is a caption strictly necessary here?

But morning found the mountain outside my slope-side window glistening white with nearly a foot of fresh western powder under a brilliant blue sky – and, being a Thursday, relatively free of crowds as well. Rejuvenated by the vegan delights of the Green V café, I rented quality demo gear and, no two ways about it, had the best skiing day of my life. The conditions definitely helped: there is simply no comparison between the wet heavy snow of the east coast (when it snows, that is, and we aren’t skiing on ice) and the champagne powder out west, nor the fact that western mountains are situated mostly above the tree line, making for vast bowls and glades whereas our Catskills mountain trails are carved out of the forest and the tree-skiing is therefore only for those fleet of carving. But truth is, I’m also a much better skier than I was back in Utah in ‘06: when I poked my K2 Sideshows over the precipice into the double-black chute aptly named Climax go, I knew that I (just about) had the strength and (to some extent) the skill to stay in control, a sense of sporting achievement equivalent to finally running a sub-3:20 marathon this past year. The trip got even better with the arrival on my second day of a family Burning Man friends, allowing me to split my stay equally between solo ski time, and group ski and social time. That it was my friend’s birthday, that she’s a wine aficionado, and had brought some choice bottles along, may have made the third morning a little more cloudy on the inside, but by then it was Saturday and the mass arrival of urban weekenders slowed the pace down anyway.

View from the top. The precipice at the top of Mammoth Mountain.

Skiing is one sport in which I don’t compete – except against my own abilities and limitations. I just love the sense of freedom, the sensation of the skis under my feet at speed, the joy of carving through glades and powdery bumps, and the way in which it all forces your mind to let go of everything else that’s been building up under the pressure of modern life. Oh, and the views, but of course. Those who know and love the sport similarly will therefore understand what that first, solo day at Mammoth meant to me. Could the commodities trader with all his spare cash possibly have experienced that same sense of euphoric, hard-earned satisfaction I had felt that Thursday morning, when the unexpected and harrowing drive (the length of England and twice the climb of Ben Nevis!) was rewarded with such a perfect day? Ah, who cares. The filthy rich can keep their private bagpipers. I’ll take (to) the slopes. Here’s to an equally great 2014, whatever your venture be.

Mammoth photographs. Click on image below to launch slideshow. 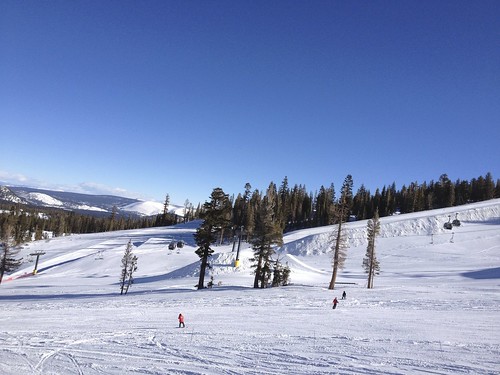